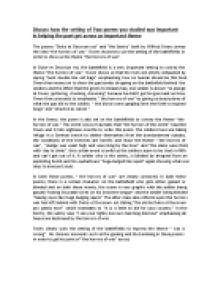 ﻿Discuss how the setting of Two poems you studied was important in helping the poet get across an important theme The poems ?Dulce et Decorum est? and ?the Sentry? both by Wilfred Owen convey the idea ?the horrors of war.? Owen chooses to use the setting of the battlefields in order to show us the theme ?the horrors of war?. In Dulce et Decorum est, the battlefield is a very important setting to convey the theme ?the horrors of war.? Owen shows us that the men are utterly exhausted by saying ?bent double like old hags? emphasizing how no human should be this tired. ...read more.

also set on the battlefields to convey the theme ?the horrors of war.? This event was so traumatic that ?the horrors of this event? haunted Owen and it him eighteen months to write this poem. The soldiers here are taking refuge in a German trench to shelter themselves from the bombardment outside; the conditions of the trenches are horrific and show the theme ? the horrors of war?, ?sludge was waist high and was rising by the hour? and ?the stairs were thick with clay to climb?, this certain event is awful as the soldiers seem to be stuck in filth and can?t get out of it. ...read more.

the soldier being blinded ?having eyes like huge bulging squid.? The after mass also reflects upon the horrors war has left behind with Dulce et Decorum est stating ?the old lie Dulce et Decorum pro patria mori? which translates to ?it is a little to die for your country.? In the Sentry, the sentry says ?I see your lights, but ours had long died out? emphasisng all hopes are destroyed by the horrors of war. Owen clearly uses the setting of the battlefields to express the theme ? war is wrong?. He chooses moments such as the gassing and the bombing in these poems in order to get his point of ?the horrors of war? across. ...read more.