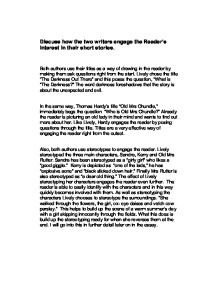 Discuss how the two writers engage the Reader&amp;#146;s interest in their short stories.

Discuss how the two writers engage the Reader's interest in their short stories. Both authors use their titles as a way of drawing in the reader by making them ask questions right from the start. Lively chose the title "The Darkness Out There" and this poses the question, "What is "The Darkness?" The word darkness foreshadows that the story is about the unexpected and evil. In the same way, Thomas Hardy's title "Old Mrs Chundle," immediately begs the question "Who is Old Mrs Chundle?" Already the reader is picturing an old lady in their mind and wants to find out more about her. Like Lively, Hardy engages the reader by posing questions through the title. Titles are a very effective way of engaging the reader right from the outset. Also, both authors use stereotypes to engage the reader. Lively stereotyped the three main characters, Sandra, Kerry and Old Mrs Rutter. Sandra has been stereotyped as a "girly girl" who likes a "good giggle." Kerry is depicted as "one of the lads," he has "explosive acne" and "black slicked down hair." Finally Mrs Rutter is also stereotyped as "a dear old thing." The effect of Lively stereotyping her characters engages the reader even further. The reader is able to easily identify with the characters and in this way quickly becomes involved with them. ...read more.

Kerry's character grew in maturity throughout the story. When we first met him he jumped out to scare Sandra, " he rose from the plough beyond the hedge" and through Sandra's thought process we were give the line "you only have to look at people to know they are not up to much." to when he took it upon himself to leave Mrs Rutters house in disgust. "Dunno `bout you, but I'm going." By doing this she also shows that people's perceptions solely based on appearance are likely to be wrong. Penelope Lively also tells her reader to fear the unknown. She does this by using Packers End. Lively doesn't let the reader gain much knowledge about Packers End, which will create fear within the reader. Lively also refers to light and dark a lot throughout the story. They are both metaphors. Light representing good, and dark evil. "The dark reach of the spinney." Which creates the feeling that there is something sinister lurking in the woods. "Polleny summer grass that glinted in the sun" this shows to me that she evokes the feeling of an innocent fresh summers day. This builds up the fear of the "darkness" in the mind of the reader. Thus poses the question to the reader, "what is the darkness out there?" This is another way of engaging the reader used by Lively. ...read more.

gives us a much clearer idea about the character than, "It is potatoes and cabbage, boiled with a little bacon. Would you like some?" This is also however a complete contrast to the language used by the curate. "Yes, my good woman." This tells the reader that he is of a higher class. This also enables us to understand that there was a social divide at the time the book was written. Lively uses slang in the same way as Hardy does Non- Standard English. Both Kerry and Sandra use slang. "Stupid so- and- so and "what'd you like us to do" are just a few examples. This enables the reader to learn more about the age of their characters and also know that they have been brought up in a more urban area. This enables the reader to align and relate to the characters. Building a relationship between themselves and the characters is a method of drawing in the reader even further. In conclusion both Hardy and Lively use a variety of techniques to engage the reader into their short stories. I found both very good and thoroughly enjoyed them. The first time I read them both, I preferred The Darkness Out There. However, after reading them more thoroughly, I preferred Old Mrs Chundle. I loved the way Hardy threw in little words and sentences that didn't seem like much but really had great impact on the story. For example "brushed the knees of his trousers, and walked off." Both authors are very effective in engaging the reader. ...read more.