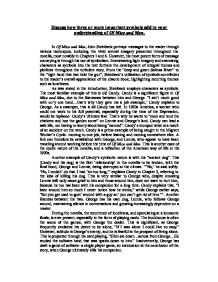 Discuss how three or more important symbols add to your understanding of Of Mice and Men.

Discuss how three or more important symbols add to your understanding of Of Mice and Men. In Of Mice and Men, John Steinbeck portrays messages to the reader through various techniques, including the vivid animal imagery presented throughout the novella, most notably in Chapters 1 and 6. However, his most potent form of message conveying is through his use of symbolism. Interweaving light imagery and exercising characters as symbols into the text furthers the development of integral themes and plotlines throughout the turbulent story. From the "deep and green Salinas River" to the "right hand that had held the gun", Steinbeck's utilization of symbols contributes to the reader's overall appreciation of the chaotic book, highlighting recurring themes such as loneliness. As was stated in the introduction, Steinbeck employs characters as symbols. The most familiar example of this is old Candy. Candy is a significant figure in Of Mice and Men, due to the likenesses between him and George. "I ain't much good with on'y one hand...that's why they give me a job swampin,' Candy explains to George. As a swamper, this is all Candy has left. In 1930s America, a worker who could not work to his full potential, especially during the time of the Depression, would be replaced- Candy's ultimate fear. That's why he wants to "cook and tend the chickens and hoe the garden some" on Lennie and George's land. ...read more.

If an illness or injury affected the work rate of a person, they were often removed from their job- a brusque feature of Capitalism. The contextual relevance expands the fluency of the text for the reader, as the framework for the 1930s American society is commonly paralleled with the novella. With regards to Curley, his "glove's fulla Vaseline", which he's "keepin' soft for his wife." This is one of many sexual references regarding Curley's wife, who regularly symbolizes the contextual attraction of whorehouses and prostitutes to the migrant workers. As stated above, Curley's wife's character is sharply familiarized with prostitutes and the brothels of the 1930s American society. Her flirtatious nature is met with an everlasting disapproval from the workers on the ranch - Candy thinks, "Curley's married...a tart," who, "got the eye," referring to her engaging character. However, in a letter to Miss Luce, the actress who plays Curley's wife in the play version of the text, Steinbeck explains, "She is a nice, kind girl and not a floozy." According to Steinbeck, "she is a little starved. She knows utterly nothing about sex except the mass of misinformation girls tell one another." From this, we can deduce that Curley's wife isn't a "Looloo", and she isn't likely to be found in "Old Susy's Place", but due to the fact Curley and her have not consummated their marriage, she feels an object to men - "no man has considered her as anything except a girl to try to make." ...read more.

she cried." As the novella was written in 1930s America, the contextual content would be ever-present. However, coming off of the Depression, the American Dream had been damaged. This is highlighted by Curley's wife, "I never got that letter," referring to her failed career as an actress. "He says he was gonna put me in the movies. Says I was a natural." This is a prime example of the American Dream - a nobody becoming a somebody. However, as with the Depression and many lives in America, this Dream was shattered - "So I married Curley," almost as if she married him to anger her mother, "'I always thought my ol' lady stole it.'" Curley's wife can be classed as the Depression itself - the ender of dreams. The Depression ended the American Dream (Curley's wife's dream), as well as other people's - in Of Mice and Men, Curley's wife also ends Lennie and George's dream, by enticing Lennie, which led to her death, and the end of the Dream. Putting this into reality, these small symbolizations, such as Curley's wife ending Lennie and George's dream, enhances the understanding of the novel, as the main contextual features are evidently clear, assisted by Steinbeck's geographical knowledge of the area - Steinbeck was raised in the California area, and he worked on a farm - the descriptions of the landscape would therefore be accurate, blurring the line between fact and fiction. One of the most effective symbols that Steinbeck employs to the novel is that of animal imagery. ...read more.