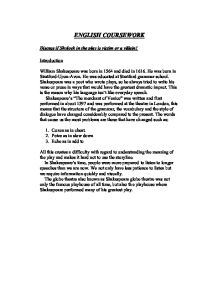 Discuss if Shylock in the play is victim or a villain!

ENGLISH COURSEWORK Discuss if Shylock in the play is victim or a villain! Introduction William Shakespeare was born in 1564 and died in 1616. He was born in Stratford-Upon-Avon. He was educated at Stratford grammar school. Shakespeare was a poet who wrote plays, so he always tried to write his verse or prose in ways that would have the greatest dramatic impact. This is the reason why his language isn't like everyday speech. Shakespeare's "The merchant of Venice" was written and first performed in about 1597 and was performed at the theatre in London, this means that the structure of the grammar, the vocabulary and the style of dialogue have changed considerably compared to the present. The words that cause us the most problems are those that have changed such as: 1. Cozen as in cheat. 2. Peize as in slow down 3. Eche as in add to All this creates a difficulty with regard to understanding the meaning of the play and makes it hard not to use the storyline. In Shakespeare's time, people were more prepared to listen to longer speeches than we are now. We not only have less patience to listen but we require information quickly and visually. The globe theatre also known as Shakespeare globe theatre was not only the famous playhouse of all time, but also the playhouse where Shakespeare performed many of his greatest play. Do I think Shylock is a victim or a villain? The play is set in Venice, a place in Italy. ...read more.

The answer could me love, love is something nobody can give up. Although they can leave parents but not love so the answer could be that because Jessica loved a Christian, she really well knew that no matter what shylock would never agree with this relationship so she might have eloped without anybody knowing. Jessica also stole his father's wealth so this could solve the question. If she hated her father then why did she dare to touch his money? Also, because he hated his dad, what did religion had to do with this? The answer could be that because his lover was a Christian she will also covert to Christianity and this leaves shylock more victim than ever. Then again the audience turns off when he turns into a villain when he screams showing his emotions and strong views "o ma daughter, my ducats! My daughter my ducats!" this can show us that he was probably more concerned about his wealth than his own daughter. Shakespeare repeats the word daughter and ducats many times to make the audience feel ho much or how many times did shylock love his daughter or ducats. The major victim role played by shylock was when he tells salerio that he sees difference between Jews and Christians. " I am a Jew. Hath not a Jew eye? Hath not a Jew hands, organs etc" this makes the audience fell really sorry for shy loch because he is saying that he sees no difference between Christians and Jews. ...read more.

Solerio and salanio are minor characters that are most anti-Semitic in how they treat shylock in the public. It is clear that Shakespeare himself was not anti-Semitic but responds to the audience appetite for the denigration of Jews. I really enjoyed reading this play although I recognise that the text is open to multiple interpretations. Some can even directly contradict one another. The elements of anti- Semitism are frequent and have led me think more deeply about how the changes in modern society have affected the belief in god and the various ways in which we discriminate against those who are different to us! Conclusion I think shylock is a victim because his own daughter Jessica betrays him. Jessica broke the 10 commandments by disobeying her father. She did not realise that when she was born, it was shylock that raised her since from childhood because her mother died. The main reason why I think shylock is a victim is because everyone in the play lives happily ever after in the play besides shylock, his own friend Tubal also left him. He wanted justice because of the way he was being treated by the Christians. Antonio and everyone humiliated him a lot. The part when he wanted the pond of flesh was actually agreed with Antonio. If it was not agreed then that would have been a different thing but it was agreed. So he deserved it. Instead of justice, he lost everything. He lost his daughter, friend, wealth and also religion. It was not fair for shylock! ...read more.