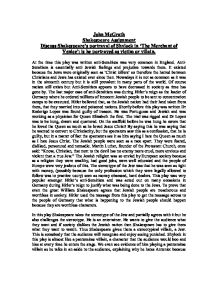 Discuss Shakespeare&amp;#146;s portrayal of Shylock in &amp;#145;The Merchant of Venice&amp;#146;: is he portrayed as victim or villain.

John McGrath Shakespeare Assignment Discuss Shakespeare's portrayal of Shylock in 'The Merchant of Venice': is he portrayed as victim or villain. At the time this play was written anti-Semitism was very common in England. Anti-Semitism is essentially anti Jewish feelings and prejudice towards them. It existed because the Jews were originally seen as 'Christ killers' so therefore the hatred between Christians and Jews has existed ever since then. Nowadays it is not as common as it was in the sixteenth century but it is still prevalent in many parts of the world. Of course racism still exists but Anti-Semitism appears to have decreased in society as time has gone by. The last major case of anti-Semitism was during Hitler's reign as the leader of Germany where he ordered millions of innocent Jewish people to be sent to concentration camps to be executed. Hitler believed that, as the Jewish nation had their land taken from them, that they married into and poisoned nations. Shortly before this play was written Dr Roderigo Lopez was found guilty of treason. He was Portuguese and Jewish and was working as a physician for Queen Elizabeth the first. The trial was rigged and Dr Lopez was to be hung, drawn and quartered. On the scaffold before he was hung he swore that he loved the Queen as much as he loved Jesus Christ! ...read more.

(Jessica, 'The Merchant of Venice, Act Two Scene Three) In this scene Jessica also tells us how she is ashamed of her father and although she is his daughter they have two different ways of life: "To be ashamed to be my father's child. But though I am a daughter of his blood, I am not to his manners." (Jessica, 'The Merchant of Venice', Act Two Scene Three) Shylock's reaction when he finds out that Jessica has eloped with Lorenzo is that of a stereo typical Jew: he does not know whether to mourn the loss of his money or his daughter: "My daughter! O my ducats! O my daughter!" (Shylock, 'The Merchant of Venice, Act Two Scene Eight) This is a reaction of a man who is incapable of normal human emotions. To make matters worse for Shylock his daughter has eloped with a Christian and as a result of this he wants to take his revenge on the whole Christian world. It is the last and worst insult that the world can give him, though of course an audience at the time would probably not see things like that. They would simply at his confusion. And as Shylock has a Christian at his mercy he is determined to keep to his deal, of taking a pound of flesh from Antonio. ...read more.

And he would get his justice against all the Christian religion if the deal would have been kept, and he would have got his pound of flesh. The evidence in the play portrays Shylock as both victim and villain depending on the way in which you look at the play and, of course, the way in which the director acts it out. I would incline more towards Shylock being victim rather than villain. I incline this way as I believe that if another race or religion persecutes a man of whatever race or religion he is going to want revenge. And when the perfect opportunity arises to take that revenge the person being persecuted will do anything to make sure that it happens. And if that person is forced to be converted to the race or religion which has persecuted him for some many years he will feel resentful. To do that to somebody just because they are of a different religion is evil. It is a fine example of bullying, he is victimised by everybody. Shylock tells us in a very moving speech, Act Three Scene One, that he is just like everybody else: "if you prick me do I not bleed". The man lends money to one of his worst enemies, he could have refused and walked away. Yes, there is a great amount of evidence to incline my opinion towards the villain side but I do believe that Shylock is a greater victim than a villain. ...read more.