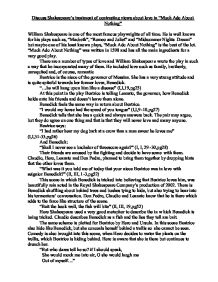 Discuss Shakespeare's treatment of contrasting views about love in "Much Ado About Nothing" William Shakespeare is one of the most famous playwrights of all time. He is well known for his plays such as, "Macbeth", "Romeo and Juliet" and "Midsummer Nights Dream" but maybe one of his least known plays, "Much Ado About Nothing" is the best of the lot. "Much Ado About Nothing" was written in 1598 and has all the main ingredients for a very good play. There are a number of types of love and William Shakespeare wrote the play in such a way that he incorporated many of them. He included love such as family, brotherly, unrequited and, of course, romantic Beatrice is the niece of the governor of Messina. She has a very strong attitude and is quite spiteful towards her former lover, Benedick. "...he will hang upon him like a disease" (I,I,19,pg25) At this point in the play Beatrice is telling Leanato, the governor, how Benedick holds onto his friends and doesn't leave them alone. Benedick feels the same way in return about Beatrice. "I would my horse had the speed of you tongue" (I,I,9-10,pg27) Benedick tells that she has a quick and always answers back. ...read more.

Benedick tells the audience how he will be "horribly in love with her". Beatrice says something very similar: "...Benedick, love on I will requite thee" This is very ironic because only the scene before was Benedick and Beatrice telling their friends how they were never to get married. Another type of love and probably the most commonly recognised form would be romantic love. Romantic love is clearly displayed between Hero and Claudio. Shakespeare uses various types of descriptive writing in the way that Hero and Claudio describe each other. "In mine eye she is the sweetest lady that ever I look'd on" (I,I,18-19,pg28) In these early stages of the play Hero and Claudio are yet to be engaged. Claudio tells Benedick exactly what he feels about Hero, but Benedick, being himself, was rude about it. "I can see yet without spectacles, and I see no such matter" But Don Pedro comes to the rescue. He agrees that he will try to woo Hero into loving Claudio. He tells him that he will "...tell fair Hero I am Claudio" at the masked ball. In the Elizabethan era, arranged marriages were very much the norm. Hero has very little choice whether or not to marry Claudio and her father, Leanato, clearly states this. ...read more.

"Would the two princes lie..." It took some persuading on the friars behalf to get Leanato to change his perspective of the situation. "There is some misprision in the princes" The confusion throughout the play if finally resolved when two watch men announce the news that they overheard Borachio's conversation about how he had wronged Hero and Claudio. The good news is spread and Claudio is deeply ashamed of what he has done for he believes that Hero died because of shock at the wedding. In fact the friar and Leanato planned to hide Hero away to teach Claudio a harsh lesson. Claudio agrees that as Hero is dead, he make have the hand of Leanato niece who looks exactly like her. The wedding day comes and the veil is removed by Claudio to show the face of his love, Hero. Beatrice and Benedick announce more love somewhat awkwardly as they become very embarrassed in front of everyone. This becomes very comical to the audience as well as the characters. Benedick asks, "Do not you love me?" for Beatrice to only reply, "Why no, no more than reason". Leaving the pair of them in a sticky situation, but with a bit of persuading, they finally come clean with the admitting for their attraction to one another. "Peace I will stop your mouth" And they kiss and then dance to end this delightful 16th century family comedy. ...read more.