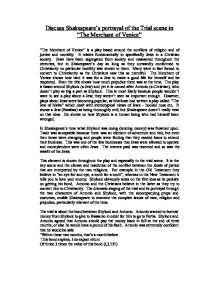 Discuss Shakespeare's portrayal of the Trial scene in &quot;The Merchant of Venice&quot;.

Discuss Shakespeare's portrayal of the Trial scene in "The Merchant of Venice" "The Merchant of Venice" is a play based around the conflicts of religion and of justice and morality. It relates fundamentally to specifically Jews in a Christian society. Jews have been segregated from society and massacred throughout the centuries, but in Shakespeare's day as long as they outwardly conformed to Christianity no particular hostility was shown to them. Many were in fact forced to convert to Christianity as the Christians saw this as merciful. The Merchant of Venice shows how hard it was for a Jew to make a good life for himself and be respected. Even the title shows how much prejudice there was at the time. The play is based around Shylock (a Jew) and yet it is named after Antonio (a Christian), who doesn't play as big a part as Shylock. This is most likely because people wouldn't want to see a play about a Jew; they weren't seen as important enough. However, plays about Jews were becoming popular, as Marlowe had written a play called "The Jew of Malta" which dealt with stereotypical views of Jews - hooked nose etc. It shows a Jew (Barabas) as being thoroughly evil, but Shakespeare doesn't really treat on that idea. He shows us how Shylock is a human being who had himself been wronged. In Shakespeare's time what Shylock was doing (lending money) ...read more.

(I,3.105) You still believe that he is bitter and wants revenge, "The villany you teach me I will execute and it shall go hard but I will better the instruction" (III,1.58). I do believe that the audience increasingly feel sorry for Shylock as he has been badly treated by Christians and he reminds us that we care all the same, "Fed with the same food, hurt with the same weapons, subject to the same diseases, healed by the same mean, warmed and cooled by the same winter and summer, as a Christian is?" (III,1.49). Therefore the audience can also contrive that Shylock is highly intelligent and they may even come to understand why his jewels are more important than his daughter as it obviously has been an unimaginable struggle to get to the successful business man he has become. His religion is also shown to be a major part of his life as he refers to the Torah often when speaking, "when Jacob graced his uncle, Labari's sheep - This Jacob from our tidy Abraham was, As his wise mother wrought in his behalf,...(I,3.65). In a way Shakespeare shows him as a stereotypical Jew - greedy, manipulative, and two-faced, but he also introduces (a new way of thinking) of Jews by showing the victimised side, whereas other plays at the time always included the selfish side of the Jews. ...read more.

He has distinguished lower rank characters by making them speak in prose. So that the audience do not get bored of the repetitive speech he has added suspensory pauses to vary expression. Shakespeare communicates the portrayal of the characters and situations through the language. Shylock is revealed by soliloquy and in dialogue; Portia and Antonio are revealed by the descriptions of others as well as in dialogue. Bassanio reveals himself almost entirely in dialogue. It had long been established that character and motives were announced directly. The audience is not left to guess what is going on in a character's mind. This device links actors and the audience intimately. The spectators shared in the play, they had a god-like knowledge of the hearts of the characters, and the two things increase their feelings of tension and suspense and the moments of dramatic irony. The impact of dialogue was enhanced by its traditional verse form; it gives the major characters an impressive grandeur, a larger than life status. In Shakespeare's plays its range power and flexibility are truly astounding, and he contrasts it from time to time with passages of prose almost as varied in style and form. Couplets can import a sense of finality, of steps taken from which there can be no turning back. Couplets of shorter lines however are often mocking jingles, "Ciration - thanks i'faith, for silence is only commendable In a newt's tongue dried, and a maid not verdible," (I,1.111) ...read more.