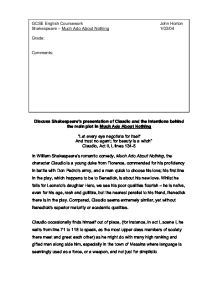 GCSE English Coursework Let every eye negotiate for itself And trust no agent; for beauty is a witch Discuss Shakespeare's presentation of Claudio and the intentions behind the main plot in Much Ado About Nothing "Let every eye negotiate for itself And trust no agent; for beauty is a witch" Claudio, Act II, i, lines 134-5 In William Shakespeare's romantic comedy, Much Ado About Nothing, the character Claudio is a young duke from Florence, commended for his proficiency in battle with Don Pedro's army, and a man quick to choose his love; his first line in the play, which happens to be to Benedick, is about his new love. Whilst he falls for Leonato's daughter Hero, we see his poor qualities flourish - he is na�ve, even for his age, rash and gullible, but the nearest parallel to his friend, Benedick there is in the play. Compared, Claudio seems extremely similar, yet without Benedick's superior maturity or academic qualities. Claudio occasionally finds himself out of place, (for instance, in act I, scene I, he waits from line 71 to 118 to speak, as the most upper class members of society there meet and greet each other) as he might do with many high ranking and gifted men along side him, especially in the town of Messina where language is seemingly used as a force, or a weapon, and not just for simplistic communication. ...read more.

We see that he is in the role of the typical hero - the Shakespearian lover, the warrior commended for bravery in battle and a young, noble man, and so we assume that we can take him at face value. Upon close inspection however, we can see hints that Claudio is much darker than he shows on the outside - he is manipulative, scheming and dominative. Claudio also symbolises the neat, conventional male that takes up the bulk space in the phallocentric hierarchy of Messina. He makes sure he conforms to what everyone else does, even these actions may conflict with his own beliefs, principles or moral high points. For instance, he plays along with the joke played upon Benedick - "Oh aye, stalk on, stalk on, the fowl sits." (Line 83, II, iii), but is it to help lure Benedick into realising his love for Beatrice, or to simply re-iterate his position as a fun loving, joking guy. If his own experience in love (or lack of it) may give any clues, it would be that he is simply using the situation. History suggests that he will view love being set into motion so he can gain from the experience and use it himself, and to confirm his preferred image of the laid-back, prankster, but also giving yet more force to the concept that he's far more sinister than first looked upon. ...read more.

Shakespeare's intentions for the play are not all on the surface. In Much Ado About Nothing, there are several hidden meanings. Firstly, the idea of a 'marriage de covenance'; one where social standing and economic stability were a great deal more important than actual emotions and romanticism. Claudio would greatly embrace this idea, as he would rather accept formal marriage than run the emotional risks of romantic wooing. He is inexperienced in love, and would play safe to get Hero than gaining a possibly better relationship, but having the chance to ruin his chances. Secondly, there are numerous hints pointing towards the play being a more detailed version of a common folk tale. In Shakespearian times, these were common, elaborate, hyperbolic, and had a mix of comic and tragic themes. They also generally had story lines to do with couples being separated by a rival, who would tell one partner that the other was being unfaithful whilst they were remaining faithful. Shakespeare didn't just have allusions to them in Much Ado About Nothing - The Merchant of Venice, A Midsummer Night's Dream, Othello and The Winter's Tale all insinuate that Shakespeare has suggested that they are all based upon this simple folk tale construction technique. ...read more.