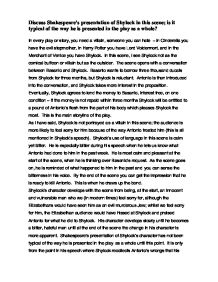 Discuss Shakespeare's presentation of Shylock in this scene; is it typical of the way he is presented in the play as a whole?

Discuss Shakespeare's presentation of Shylock in this scene; is it typical of the way he is presented in the play as a whole? In every play or story, you need a villain, someone you can hate - in Cinderella you have the evil stepmother, in Harry Potter you have Lord Voldermort, and in the Merchant of Venice you have Shylock. In this scene, I see Shylock not as the comical buffoon or villain but as the outsider. The scene opens with a conversation between Basanio and Shylock. Basanio wants to borrow three thousand ducats from Shylock for three months, but Shylock is reluctant. Antonio is then introduced into the conversation, and Shylock takes more interest in the proposition. ...read more.

He is most calm and pleasant at the start of the scene, when he is thinking over Basanio's request. As the scene goes on, he is reminded of what happened to him in the past and you can sense the bitterness in his voice. By the end of the scene you can get the impression that he is ready to kill Antonio. This is when he draws up the bond. Shylock's character develops with the scene from being, at the start, an innocent and vulnerable man who we (in modern times) feel sorry for, although the Elizabethans would have seen him as an evil murderous Jew; whilst we feel sorry for him, the Elizabethan audience would have hissed at Shylock and praised Antonio for what he did to Shylock. ...read more.

I Hate him" as Antonio is a Christian and a popular character. Shylock is also unpopular when he proposes his bond. I think that the way Shylock was presented in this scene was fairly typical of the way he is presented as a whole only when he is the villain. However, I also think that he is at his "most gentle" in this scene. As the play moves on Shylock's hatred grows and grows until at the end of the play he feels so much loathing towards Antonio that the conclusion of the trial devastates him so much that he must leave the court. It is sad that a man should feel so much hatred towards another human being; although the story is only a play and the characters fictional, I feel the hatred was real. ...read more.