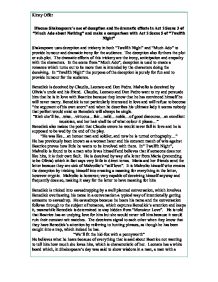 Discuss Shakespeare's use of deception and its dramatic effects in Act 2 Scene 3 of "Much Ado about Nothing" and make a comparison with Act 2 Scene 5 of "Twelfth Night" Shakespeare uses deception and trickery in both "Twelfth Night" and "Much Ado" to provide humour and dramatic irony for the audience. The deception also furthers the plot or sub-plot. The dramatic effects of this trickery are the irony, anticipation and empathy with the characters. In the scene from "Much Ado", deception is used to create a romance which turns out to be more than is intended by the characters doing the deceiving. In "Twelfth Night" the purpose of the deception is purely for fun and to provide humour for the audience. Benedick is deceived by Claudio, Leonato and Don Pedro. Malvolio is deceived by Olivia's uncle and his friend. Claudio, Leonato and Don Pedro want to try and persuade him that he is in love with Beatrice because they know that he has convinced himself he will never marry. Benedick is not particularly interested in love and will refuse to become "the argument of his own scorn" and when he describes his ultimate lady it seems nobody that perfect would exist so Benedick will always be single. "Rich she'll be...wise...virtuous...fair...mild...noble...of good discourse...an excellent musician, and her hair shall be of what colour it please..." ...read more.

At the end of the scene Benedick has been called into dinner by Beatrice and is trying to analyse what she said to him. He believes that she is in love with him but doesn't want to show it so she is acting how she would normally act towards Benedick, trying to make it a match of wits as usual. Beatrice has a wit match with Benedick, even though he is just trying to return any affection. As he reads a "double meaning" into what Beatrice has said, it does not occur to him that he has been deceived and that Beatrice knows nothing of the trick. "If I do not take pity on her, I am a villain; if I do not love her, I am a Jew" At the beginning of the scene however, Benedick is questioning how it is possible for Claudio to have once been such a devoted soldier and swearing that he would never marry but has now found love in Hero and is due to marry her. Deciding not to follow Claudio's tracks, Benedick swears to himself that he will never love and never marry. He gives the picture of his ideal woman, one so perfect that he assures himself he will never find a woman to match his criteria so he will remain a bachelor forever, as he has always intended to do. ...read more.

To see Malvolio getting dressed into yellow stockings and crossed garters to impress a woman who does not love him as he thinks she does is hilarity in itself. In conclusion the use of deception and trickery in both of these classic Shakespearean stories provides humour, suspense and dramatic irony for the audience. Deception can be a difficult and challenging idea to write into a play but Shakespeare has excelled in the deception whilst still holding the comedy that can effectively run alongside such an idea with great ease. The dramatic irony created by the hiding and eavesdropping creates humour in another dimension also adding to the audiences' enjoyment. The anticipation that comes with deception and waiting to see if anything becomes of the deception is a well used dramatic tool in both plays and as it turns out, Benedick does eventually marry Beatrice, an event which could be called dishonest as they were tricked into showing feelings for each other and may have been having sarcastic verbal fights forever if their friends hadn't intervened. The use of hunting language throughout both scenes make you feel as though the characters being deceived have literally been captured, an interesting thought seeing as it were the deceivers' intentions to "catch" them into an imaginary trap. Words related to fishing and bear baiting can compare the people being deceived to innocent and unsuspecting animals as well as being used to show the idea of the victim being caught. Kirsty Offer ...read more.