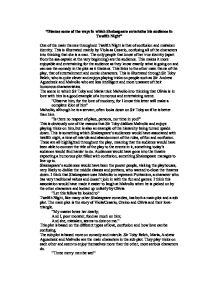 &quot;Discuss some of the ways in which Shakespeare entertains his audience in Twelfth Night&quot;

"Discuss some of the ways in which Shakespeare entertains his audience in Twelfth Night" One of the main themes throughout Twelfth Night is that of confusion and mistaken identity. This is illustrated mainly by Viola as Cesario, confusing all of the characters into thinking that she is a man. The only people that know of her true identity (apart from the sea captain at the very beginning) are the audience. This makes it more enjoyable and entertaining for the audience as they know exactly what is going on and can see the comedy in the plot as it thickens. This links to the other main theme of the play, that of entertainment and comic characters. This is illustrated through Sir Toby Belch; who is quite clever and enjoys playing tricks on people such as Sir Andrew Aguecheek and Malvolio who are less intelligent and more unaware of their humorous characteristics. The scene in which Sir Toby and Maria trick Malvolio into thinking that Olivia is in love with him is a good example of a humorous and entertaining scene. ...read more.

"My master loves her dearly; And I, poor monster, fond as much on him; And she, mistaken, seems to dote on me." This plot is based on the different types of love, confusion and how love can be confusing. The sub plot is based more on comedy and misrule. Sir Toby Belch, Maria, Andrew Aguecheek and Malvolio are the main characters in the sub plot. They play tricks on each other and seem to enjoy themselves more than the other, more serious characters do. "Three merry men be we!" I think that Shakespeare created these two distinct plots to build up the element of contrast running throughout the play. One main difference in the language is that the more serious characters in the main plot speak mainly in verse; "Away before me to sweet beds of flowers! Love thoughts lie rich when canopied with bowers" Whereas the humorous characters often speak in prose; "I had rather than forty shillings I had such a leg, and so sweet a breath to sing, as the fool has." ...read more.

Another example is using Viola, the most honest character in the play, to fool everyone by having her in disguise. This means that there are very few characters that the audience can completely trust in the play. There is a lot of confusion used in the play; making it interesting, hard to follow at times and always entertaining for the audience. There are many examples; Viola's disguise, love triangles and (particularly at the end), characters changing who they love quickly. I think that the ending of the play is very effective. Shakespeare manages to combine the two plots for the first time by creating a humorous sense of confusion between the main characters as they discover the secrets about each other, "So comes it, lady you have been mistook" something which until then had only been a part of the sub plot. This is satisfying and entertaining for the audience as the characters find out the things which they had had hidden from them. This coming together and the ending of the chaos is also symbolic as it represents the end of the holiday season as the rules come back into place and everything returns to normal. ...read more.