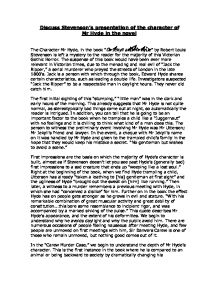 Discuss Stevenson's presentation of the character of Mr Hyde in the novel The Character Mr Hyde, in the book "Dr Jekyll and Mr Hyde" by Robert Louis Stevenson is left a mystery to the reader for the majority of this Victorian Gothic Horror. The suspense of this book would have been ever more relevant in Victorian times, due to the menacing and real evil of "Jack the Ripper," a serial murderer who preyed the streets of London in the late 1800's. Jack is a person with which through the book, Edward Hyde shares certain characteristics, such as leading a double life. Investigators suspected "Jack the Ripper" to be a respectable man in daylight hours. They never did catch him. The first initial sighting of this "stumping," "little man" was in the dark and early hours of the morning. This already suggests that Mr Hyde is not quite normal, as stereotypically bad things come out at night, so automatically the reader is intrigued. ...read more.

We begin to understand why he avoids daylight and why the public avoid him. There are numerous occasions of people feeling nauseous after meeting Hyde, and few people are unmoved on first meetings with him, Sir Danvers Carew is one of those who remain unmoved, but nothing good comes out of it. In the "Carew Murder Case," we begin to understand the depth of Mr Hyde's character. This is the first instance in the book where he is compared to an animal or being backward to society by dramatically changing his suspiciously polite mood to "ape-like fury." This horrific change resulted in a vicious attack on Sir Carew, the person Hyde was so politely speaking to in the street who also happened to be a famous MP. Moreover, for an MP to be "clubbed...to the ground" by a "hailing...storm of blows" was a "crime of singular ferocity" that "London was startled" by. A maid witnessed this cruel murder from a nearby house and gave Edward Hyde's name to the police. ...read more.

For example the times all through the book when Jekyll has had to clear up after Hyde's mess (trampling the child was covered up with a cheque) is like the Victorians having to clear up after mistakes in their society and lives. Another example is Hyde being scared that Jekyll could stop him from living, which is saying that in the end good has more power over evil. In the book there is also an element of pity towards Hyde, as if he is the misunderstood character, but I suppose this pity for him could be a trap and in the end you will never see any real good out of him, this is along the lines of what Jekyll said in the final chapter. In this book, Stevenson has focused on Juxtaposition (opposites) and Jekyll and Hyde's battle with each other is a metaphor of this. This book was a horror novel in Victorian times, and rightly so, with their obsession with hell and "Jack the Ripper" still roaming the streets this novel gave them even more reason to fear God and the evils that surround them. ...read more.