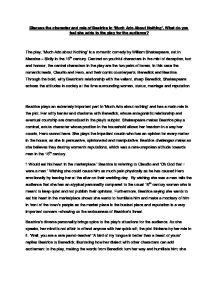 Discuss the character and role of Beatrice in Much Ado About Nothing. What do you feel she adds to the play for the audience?

Discuss the character and role of Beatrice in 'Much Ado About Nothing'. What do you feel she adds to the play for the audience? The play, 'Much Ado about Nothing' is a romantic comedy by William Shakespeare, set in Messina - Sicily in the 16th century. Centred on youthful characters in the mist of deception, lust and honour, the central characters in the play are the two pairs of lovers, in this case the romantic leads, Claudio and Hero, and their comic counterparts, Benedick and Beatrice. Through the bold, witty Beatrice's relationship with the valiant, sharp Benedick, Shakespeare echoes the attitudes in society at the time surrounding women, status, marriage and reputation. Beatrice plays an extremely important part in 'Much Ado about nothing' and has a main role in the plot. Her witty banter and charisma with Benedick, whose antagonistic relationship and eventual courtship are dramatized in the play's subplot. Shakespeare makes Beatrice play a comical, astute character whose position in the household allows her freedom in a way her cousin, Hero cannot have. She plays the impatient cousin who has an opinion for every matter in the house, as she is persuasive, opinionated and manipulative. Beatrice challenges males as she believes they destroy women's reputations, which was a rare-unspoken attitude towards men in the 16th century. ...read more.

Suggesting a woman's role in the society is to be with a man and love and honour him, as she is finally doing what women are 'supposed' to be doing. The status of women in shown throughout the play by Hero, with Beatrice's character contrasting this. 'Will you have me, lady?' - Don Pedro asks Beatrice to marry him and she declines the offer, 'No, my lord... I was born to speak all mirth, no matter' Her outspoken independence in rejecting, where an passive 16th century female would find it hard to conjure up a justification in declining the offer in the first place. She wants to remain unmarried and not live the expected life for a 16th century woman living in Messina. Also, she is the only female in the household who has the quick wit and vocabulary to retourt to the men - showing the audience that she was before her time and women in the 16th century had a lower status in the house compared to the men. The two cousins in the plot are contrasted throughout, echoing the attitude in society at the time, .Hero acts the way in which a woman should act In front of men in the 16th century, seen but not heard and to obey and honor the male. ...read more.

The large percentage of women around the time had their main job to marry and to make a perfect mother and wife. This is shown through the character of Hero, as she conforms to Claudio and her father throughout the play. But, the sixteenth century did produce a large number of notable women who were heads of state and made a notable impact in the public sphere. These include Queen Elizabeth of England, the Queen Mother Catherine de' Medicis of France, Queen Jeanne d'Albret of Navarre, Mary Queen of Scots. All had to deal with being both a sovereign and a woman, all of them large characters and top of their ladder. I feel this type of women in the 16th century is obviously echoed through Beatrice and her independent opinions and attitudes to men at the time. Elizabeth remained a Virgin Queen (politically, anyway), using her marriage prospects as a diplomatic tool, and retaining England's independence in the meantime. She was certainly one of the key shapers of the national character of England, and I feel that Shakespeare was trying to represent Beatrice through the head of state at the time to please her and hopefully make his plays more popular than they already were. This was very daring as to displease the Queen could end fatally, but Shakespeare was successful in this and is recognised today as one of the greatest play writers of all time ...read more.