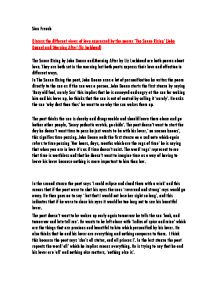 Discuss the different views of love expressed by the poems 'The Sunne Rising' (John Donne) and 'Morning After' (liz lochhead).

Sian French Discuss the different views of love expressed by the poems 'The Sunne Rising' (John Donne) and 'Morning After' (liz lochhead) The Sunne Rising by John Donne and Morning After by Liz Lochhead are both poems about love. They are both set in the morning but both poets express their love and affection in different ways. In The Sunne Rising the poet, John Donne uses a lot of personification he writes the poem directly to the sun as if the sun was a person. John Donne starts the first stanza by saying 'Busy old fool, unruly Sun' this implies that he is annoyed and angry at the sun for waking him and his lover up, he thinks that the sun is out of control by calling it 'unruly'. He asks the sun 'why dost thou thus' he want to no why the sun wakes them up. The poet thinks the sun is cheeky and disagreeable and should leave them alone and go bother other people, 'Saucy pedantic wretch, go chide'. ...read more.

The poets' attitude to the sun is very abrupt and he is very arrogant towards him. He thinks that every one should want to be like him including the sun itself, 'all honours, all wealth alchemy' The poet may think that the sun is jealous of them 'thou, Sun, art half as happy as we'. At the end of the poem the poet says 'in that the worlds contracted thus' by this he means that the sun works for the world and he and his lover are the world 'this bed thy centre is, there walls thy sphere'. 'Morning After' by liz Lochhead is set in the morning like 'The sunne Rising', but Liz Lochhead expresses her love differently to the way that John Donne does. 'Morning After' is about the poet and her lover lying in bed reading their Sunday morning newspapers. Unlike 'The Sunne Rising' there is tension between them 'separate after all'. Maybe the title 'Morning After' gives us a clue that something had gone on the night before that now is causing tension between them. ...read more.

There is a cold atmosphere the poet says 'I shiver while you flick too quickly, too causally through the pages, with too passing and interest'. Here the poet repeats the word 'too' to emphasize an uneasy atmosphere, whole Jon Donne repeats 'all' to emphasize that they are everything and nothing else matters. In 'Morning After' the poet says 'too passing an interest' this means that her lovers' interest in thing does not last very long. Maybe the poets' lover has lost interest in their relationship in the same way as he did with his newspaper. I prefer the poem 'The Sunne Rising' to 'Morning After' as 'The Sunne Rising is a poem about a man who loves his girlfriend so much that he only thinks of her and that nothing else matters to him . He expresses his feelings more unlike in the 'Morning After' where the actions speak louder than words e.g. 'held like screens before us'. I like the poem 'The Sunne Rising' as John Donne thinks that he and his lover are everything and not even the 'rags if time' should come between them. ...read more.