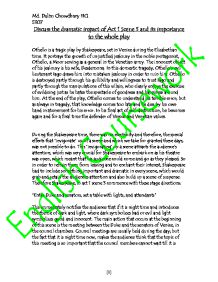 Discuss the dramatic impact of Act 1 Scene 3 and its importance to the whole play Othello is a tragic play by Shakespeare, set in Venice during the Elizabethan time. It portrays the growth of unjustified jealousy in the noble protagonist, Othello, a Moor serving as a general in the Venetian army. The innocent object of his jealousy is his wife, Desdemona. In this domestic tragedy, Othello's evil lieutenant Iago draws him into mistaken jealousy in order to ruin him. Othello is destroyed partly through his gullibility and willingness to trust Iago and partly through the manipulations of this villain, who clearly enjoys the exercise of evildoing just as he hates the spectacle of goodness and happiness around him. At the end of the play, Othello comes to understand his terrible error; but as always in tragedy, that knowledge comes too late and he dies by his own hand in atonement for his error. In his final act of self-destruction, he becomes again and for a final time the defender of Venice and Venetian values. During the Shakespeare time, there was no electricity and therefore, the special effects that 'invigorate' up of a scene and which we take for granted these days, was not possible to do. This 'invigorating' up a scene attracts the audience's attention, which was very crucial for Shakespeare to embark on as his theatre was open, which meant that his audience could come and go as they pleased. So in order to refrain them from leaving and to enchant their interest, Shakespeare had to include something important and dramatic in every scene, which would grab and retain the audiences attention and also build up a scene of suspense. Therefore Shakespeare, in act 1 scene 3 commence with these stage directions: "Enter Duke and senators, set a table with lights, and attendants" This immediately notifies the audience that if it is night time and introduces the theme of dark and light, where dark symbolizes bad or evil and light symbolizes good and innocent. ...read more.

Another example in Desdemona's dedication in deciding to do as she sees fit is when she stands up to her father, announces her love for the social outcast in front of the most important figures in Venice and just like her mother, chooses her husband above her father: "But here's my husband; And so much duty as my mother showed To you, preferring you before her father" The above quotation proves that Desdemona can think for herself, knows what she is doing and is strong enough to live with the decision she makes. When Desdemona insists on going to battle alongside her husband, she performs, the final act of love anyone could do for their lover, she is willing to die, just so she can spend a while with her husband. Also Desdemona shows she will love Othello whatever situation he may be in, she tries to persuade the senate to allow her to go with Othello by reminding them the meaning of the wedding vows she took and tells them how she would miss him if she didn't go with Othello: "The rites for which I love him are benefits me, And I a heavy interim shall support By his dear absence let me go with him" The above quote, once again shows that Desdemona, knows what she is doing and is willing to do anything to be with Othello. It is as though Shakespeare is saying that Desdemona feels that she is the earth and Othello is her sun. In act 1, scene 3, Desdemona shows she is mentally strong, and her speech is well thought out. Her use of language shows that she is to pushover, she has a sharp mind and that she knows how to make the most of it. In act 1, scene 3, Desdemona's character is let out of its leash, she shows the audience and especially to her father, that she is not a little girl, and that she can think for herself. ...read more.

of view in the matter of her love with Othello, which shows that she is doing exactly what a man can do. The importance of her side of the story emphasizes this, showing the rather sexist male audience that a lot more can be learnt if women have the same rights as men. The twisted two-faced character of the evil Iago reveals to the audience who associates non-Christians and non-white people with evil that even white Christians can be evil and mischievous. Act 1, scene 3 is nearly the most important scene in the entire play, it is the single scene that proves to the audience how easy it was to destroy lago's evil plans; if only Othello remembered how much Desdemona sacrificed for him and trusted the right people more than others. This scene also sets the mood for the rest of the play; it is inevitable that lago's plans will succeed to some extent, and that the damage he causes will be irresistible. Another reason why this is so important is because racism was revealed at the beginning then concealed throughout the rest of the pay and then was revealed again, when Othello's command was taken from him. On the whole, the importance of Act 1, scene 3 is immense to a great extent, because if this scene was changed then the entire play could have ended up as a romance and not a tragedy, other tragedy of Shakespeare are King Lear and Macbeth. On the whole 'Othello' is about betrayal, betrayal from lago to Othello and Cassio, betrayal from the Duke and Senators to Othello and betrayal from Othello to Desdemona, as she is the one person Othello should have rusted more than anything else. Othello should have thought back to the wedding vows he took and asked Desdemona if she really was having an affair with Cassio, as Desdemona had trusted him in the middle of Act 1, Scene 3. ?? ?? ?? ?? Md. Dalim Chowdhury 11Q 5307 [1] ...read more.