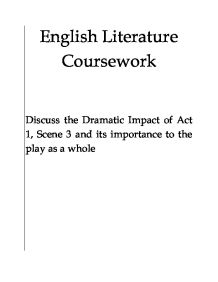 Discuss the Dramatic Impact of Act 1, Scene 3 of othello and its importance to the play as a whole

English Literature Coursework Discuss the Dramatic Impact of Act 1, Scene 3 and its importance to the play as a whole Shayan Moghaddam Othello is a play about jealousy. In it we meet an array of characters whose characteristics change throughout the play. In Venice, Othello elopes with Desdemona, the daughter of a Venetian senator. Iago, who despises Othello and who believes has been looked over for a promotion, plots to bring down Othello. Through Iago's deceit and exploitation, Othello believes that Desdemona has been disloyal and kills her. When the reality comes out, Othello stands on his reputation and kills himself. The play is set primarily in Cyprus however; it starts in the cosmopolitan town of Venice. This makes us assume that the characters are civil and arguably, learned. Act 1 scene 3 kicks off in the duke's council chamber. The beginning of the scene sees the Duke and Senators discussing the Turkish threat to Cyprus. At the beginning of the scene, the first stage direction is 'set at a table with lights'. This stage direction can be seen as being important as the light could signify importance. Furthermore, in the 1600's, light could also have been interpreted as enlightenment and we can infer from this fact that it means that there is to be little trickery or deception in this scene. It also focuses the scene on and around the table. Furthermore, this play was written at a time where religion was mandatory and therefore the light could represent a religious meaning. The common Christian conception of the meaning of light originated from the first day of creation when God separated light from darkness. In this context, the light could be seen to be a sign of the creation of a new problem. Conversely, David M. Zesner states in his guide to Shakespeare that "Cyprus stands as an insecure Christian outpost on the frontier of Barbarism" which could mean that Shakespeare was trying to remove this stereotype. ...read more.

He says: "I will a round unvarnished tale deliver... of my whole course of love" what this means is that he will deliver a plain, undecorated tale of his love life which gives us the impression that he is modest and not one to show off. Throughout the scene, Brabantio says that 'Desdemona feared to look on Othello'. This simple statement could be playing havoc upon Othello's feeling and may start to plant some seeds of doubt into his mind about Desdemona's loyalty to him. Another possible feeling he may be experiencing is fear. Fear that it was him, Othello may be scared that he has done something to Desdemona to make her afraid of him. Another controversial point Brabantio makes is that Othello and Desdemona's relationship was 'against the will of nature' implying that black and white people ought not to have relationships. This inference I have made is rather reliable as racism was common in Shakespeare's day. Othello could feel anger at this moment. Or he could be feeling inferior due to his ethnicity. Whatever he may be feeling, he composes himself very well and we do not know of his true feelings. This is, in my opinion, why Othello is a highly regarded character. He has the ability to compose himself and maintain his dignity whereas Brabantio has come to be seen as a winging character by the duke. Brabantio's accusation that Othello has used magic to gain his daughters love ('mixtures powerful o'er the blood') may make Othello astonished. Othello's reaction to this is, again a calm approach. He makes a very profound speech that persuades the duke and senators that he is innocent. Furthermore, we have further reason to believe Othello when he calls upon an alibi. Desdemona. Throughout this scene, Othello reveals to us that he is a very rational man. Othello is a mixture of greatness and weakness, in his own words "an honorable murderer". ...read more.

Iago is the opposite of God, i.e. he is the devil. Iago in this play has the traits of the Devil; He is a liar, he makes promises he has no intention of keeping, he tells far-fetched stories in order to trap people and lead them to their destruction, and he sees other's greatest weaknesses and uses these against them. Iago does all this not for any good reason, but for cruelness and as mentioned before, jealousy. Act 1 Scene 3 is a significant scene in "Othello". We learn about Othello's life and personality, the setting of the play begins to change and we become aware of Iago's plans. What we learn about Othello is of great importance as we learn about Othello's expressiveness. Othello makes use of calm, touching and controlling language right the way through Act 1, 3 which bring out a lot of fondness and respect for him from the audience, and it may have been this which led to the Duke not taking action against him. We must note Othello's eloquence in this scene, because we need to be aware of how this plunge into a resentful person alters him from the rational man we observe in Act 1, Scene 3 to a brutal, "green-eyed" and mistrustful "devil". Consequently, Othello's eloquence in this scene is essential to the rest of the play. At the last part of this scene, Iago states a soliloquy in which he tells of his plan for the forthcoming scenes. This is one more vitally significant part to the rest of the play. This is so because it explains to the audience how Iago aims to control the victims. If we did not have this short account of how Iago will accomplish his goals, the audience will be left in the dark and may not be aware of why Iago is carrying out some acts in the scenes to come. Iago's speech is also a clever way to finish the act it leaves the audience wanting to read on, which creates dramatic impact. ...read more.