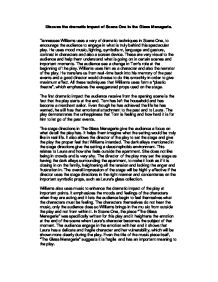 Discuss the dramatic impact of Scene One in the Glass Menagerie. Tennessee Williams uses a vary of dramatic techniques in Scene One

Discuss the dramatic impact of Scene One in the Glass Menagerie. Tennessee Williams uses a vary of dramatic techniques in Scene One, to encourage the audience to engage in what is truly behind this spectacular play. He uses mood music, lighting, symbolism, language and gesture, contrast in characters and also a screen device. These are very visual to the audience and help them understand what is going on in certain scenes and important moments. The audience see a change in Tom's role at the beginning of the play. Williams uses him as a character and also the narrator of the play. He transfers us from real-time back into his memory of the past events and a good director would choose to do this smoothly in order to give maximum effect. All these techniques that Williams uses form a "plastic theatre", which emphasizes the exaggerated props used on the stage. The first dramatic impact the audience receive from the opening scene is the fact that the play starts at the end. Tom has left the household and has become a merchant sailor. Even though he has achieved the life he has wanted, he still has that emotional attachment to the past and to Laura. ...read more.

It expresses the fact that Tom wants to leave the apartment and live his own free life away from Amanda and her tormenting ways. He feels restricted in the confined space and at that present time, the only escape he really has is the fire escape balcony to their apartment, where he regularly goes out to smoke a cigarette. When we see him here, it creates the impact that he is anticipating his escape from the apartment. On the other hand, the fire escape shows that Laura wants to escape into the apartment. She does not enjoy being in crowds because she is shy and over-exaggerates her slight limp. It relates to her collection and shows that it is her only escape. She turns away from the outside world, as at the end of scene one, she believes that she is "going to be an old maid". Amanda also tries to re-create the past in scene one. She talks about her gentlemen callers and how Laura will receive them too, but Laura is convinced she will receive none. We see Amanda's Southern-living style as she is already preparing for a gentleman caller. One of the most symbolic pieces of prop there is on the stage is the picture of their father. ...read more.

We see her as the person 'in the middle' of arguments as she does not know which way to go and does not want the family splitting up even more. We also see her in this scene get uneasy when the father is mentioned. This triggers the audience to believe that she is still trying to get over the fact that he left them and how big the emotional scar is that was left. A screen device is also included in the stage directions of the play. This has several good dramatic impacts to the play. In scene one, we see the unique effect it has on how the audience can interpret the characters emotions and how it all relates to the past. During scene one, the image of 'O� sont les neiges' appears on the screen device. This comes from a 15th century poet and it praises beautiful women. The title means 'Where are the snows of yesteryear?' and it reminds the audience of Amanda's younger past. Overall, the first scene of The Glass Menagerie has a good dramatic base and sets a good tone for the rest of the play. We get a sound viewing of each of the characters and how they behave, and also the audience get some background knowledge prior to actual acting of Tom's memory. With this, the audience can then settle into the play well and understand what is happening at certain points. ...read more.