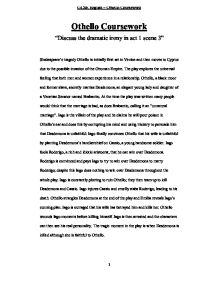 Discuss the dramatic irony of Act 1 Scene 3 of Othello

Othello Coursework "Discuss the dramatic irony in act 1 scene 3" Shakespeare's tragedy Othello is initially first set in Venice and then moves to Cyprus due to the possible invasion of the Ottoman Empire. The play explores the universal feeling that both men and women experience in a relationship. Othello, a black moor and former slave, secretly marries Desdemona, an elegant young lady and daughter of a Venetian Senator named Brabantio. At the time the play was written many people would think that the marriage is bad, as does Brabantio, calling it an "unnatural marriage". Iago is the villain of the play and he claims he will pour poison in Othello's ear and does this by corrupting his mind and using trickery to persuade him that Desdemona is unfaithful. Iago finally convinces Othello that his wife is unfaithful by planting Desdemona's handkerchief on Cassio, a young handsome soldier. Iago fools Roderigo, a rich and idiotic aristocrat, that he can win over Desdemona. Roderigo is convinced and pays Iago to try to win over Desdemona to marry Roderigo; despite this Iago does nothing to win over Desdemona throughout the whole play. Iago is constantly plotting to ruin Othello; they then team up to kill Desdemona and Cassio. Iago injures Cassio and cruelly stabs Roderigo, leading to his death. Othello strangles Desdemona at the end of the play and Emilia reveals Iago's cunning plan. Iago is outraged that his wife has betrayed him and kills her. Othello wounds Iago moments before killing himself. Iago is then arrested and the characters can then see his real personality. The tragic moment in the play is when Desdemona is killed although she is faithful to Othello. The theme of the play is deceit and jealousy. It shows that jealous can easily corrupt your mind and that once you have any doubt in your mind it is hard to get rid of. ...read more.

After Iago says, "Must bring this monstrous birth to the world's light" he could blow out the last candle on stage and this would show that the darkness and evil had arrives. During Iago's soliloquy he could fold his arms to show that he has withdrawn himself from the other characters. This would also show that he is keeping himself in a secretive manor and shows that he will slyly plot his evil plan. Act 1 scene 3 is a very important scene; it is the first time that the audience see Desdemona. This scene also creates the reason for the play to move to Cyprus. From this scene the audience get an understanding of all the characters; that Othello is brave, "Valiant Othello" and that Iago is cunning, manipulative and two faced. The audience also see that Desdemona is in love with Othello, and that she is very polite. The audience also see that Brabantio's claims are false, "She is abused, stolen from me and corrupted". This scene enables Shakespeare to make the characters change over time at the end of the film. This scene makes Othello out to be strong and brave; this is a contrast to the end of the play when Othello is jealous. John Todd released a paper in 1955 that was based on a syndrome that he called the Othello syndrome, this is the dissolution of a partner or spouse's faithfulness. The symptoms are interrogation of the partner and sometimes stalking. The name was taken from Shakespeare's play because the syndrome can often result to homicide or suicide, as it did in this Othello's case. Although this play was written in 1602 it still carries some important moral lessons for us today. A moral lesson of the play is not to be jealous as it could lead to trouble; this is often described as "the green eyed monster". Another moral lesson is to not always trust everyone, as not everybody is who they seem to be. ?? ?? ?? ?? GCSE English - Othello Coursework 1 ...read more.