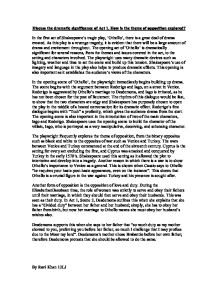 Discuss the dramatic significance of Act 1. How is the theme of opposition explored? In the first act of Shakespeare's tragic play, 'Othello', there is a great deal of drama created

Discuss the dramatic significance of Act 1. How is the theme of opposition explored? In the first act of Shakespeare's tragic play, 'Othello', there is a great deal of drama created. As this play is a revenge tragedy, it is evident that there will be a large amount of drama and excitement throughout. The opening act of 'Othello' is dramatically significant for several reasons, from the themes and issues covered in the act, to the setting and characters involved. The playwright uses many dramatic devices such as lighting, weather and time to set the scene and build up this tension. Shakespeare's use of imagery and language in the play also helps to produce dramatic effects. This opening is also important as it establishes the audience's views of the characters. In the opening scene of 'Othello', the playwright immediately begins building up drama. The scene begins with the argument between Roderigo and Iago, on a street in Venice. Roderigo is aggravated by Othello's marriage to Desdemona, and Iago is irritated, as he has not been chosen for the post of lieutenant. The rhythm of this dialogue would be fast, to show that the two characters are edgy and Shakespeare has purposely chosen to open the play in the middle of a heated conversation for its dramatic effect. ...read more.

Desdemona's mother chose Brabantio before her own father; therefore Desdemona protests that she should be allowed to do the same. During this conversation, Brabantio and Desdemona fail to mention love even once, and this outlines the opposition in this play between love and duty. Desdemona consistently explains that she has a duty to both her father and Othello, but does not attempt to justify her marriage to Othello by her love for him. Desdemona uses phrases such as "my lord" to describe Othello as the male head of the house, rather than "my love". The irony is that before Desdemona arrives, Othello explains that her father "loved me, oft invited me, still questioned me the story of my life" and this is the reason why Desdemona falls for Othello. "She loved me for the dangers I had passed And I loved her that she did pity them" It is also interesting that Othello mentions his and Desdemona's love for each other, yet Desdemona only describes her duty towards him. This may be the opposition between societies, as Othello expresses his feelings with love, while Desdemona has been brought up to be obedient and dutiful. The Elizabethan/Jacobean audience will agree with the fact that Desdemona must obey her husband now as this would be familiar in their own society; however the fact that Desdemona married a black man means this marriage will not approved of. ...read more.

This is repeated eleven times in this scene, which shows Iago's insisten voice showing what he really wants from the alliance. Othello on the other hand appears to be a very honest and trustworthy man, however the dramatic irony comes when Othello says "my ancient; a man he is of honest and trust". This is clearly not the case, as his ancient, Iago, is secret plotting against him and will later cause his downfall. Overall in the opening act of 'Othello', the dramatic significance of Act 1 is the building up of the characters, suggesting what may lead to the downfall of the protagonist, Othello. The Elizabethan/Jacobean audience will know that this is a tragedy, and will expect this plot to develop quickly and dramatically. The playwright has used several techniques in order to build up the audiences views of the characters, such as the first scene when Iago and Roderigo are shown arguing, to the next few scenes in which Iago pretends to be on Othello's side after exposing his secret marriage. The oppositions in the play work very effectively to not only build up the plot and drama, but also to establish the characters, as the honest can be seen in Othello, which the deception is portrayed in Iago. ?? ?? ?? ?? By Ravi Khan 12LJ ...read more.