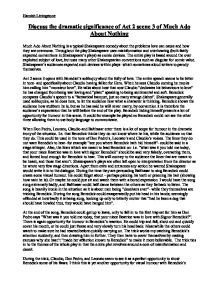 Discuss the dramatic significance of Act 2 scene 3 of Much Ado About Nothing.

Hamish Livingstone Discuss the dramatic significance of Act 2 scene 3 of Much Ado About Nothing Much Ado About Nothing is a typical Shakespeare comedy about the problems love can cause and how they are overcome. Throughout the play Shakespeare uses misinformation and overhearing (both fairly expected conventions in Shakespeare's plays) as comic devices. The entire play is based around the over exploited subject of love, but uses many other Shakespearian conventions such as disguise for comic value. Shakespeare's audiences expected such devices within plays- which sometimes aloud writers to parody themselves. Act 2 scene 3 opens with Benedict's soliloquy about the folly of love. The entire speech seems to be bitter in tone- and specifically about Claudio having fallen for Hero. When he sees Claudio coming he mocks him calling him "monsieur love". He talks about how that now Claudio "dedicates his behaviours to love" he has changed from being war loving and "plain" speaking to being sentimental and soft. ...read more.

During the time they are persuading Balthasar to sing Benedick could create some visual humour. He could fidget about - perhaps picking his teeth or preening his hair (showing how vain he is). Or maybe he could just sit and watch them with a bored expression. I would have the song sung extremely badly, and Balthasar could half dance between the others as they lie back to listen. The song is heavily ironic in the situation as it is about men being "deceivers ever"- while they themselves are tricking Benedick. During the song Benedick could exasperatedly put his head in his hands; seemingly offended at how badly it is being sung, looking up only to bitterly mutter that "had he been a dog that should have howled thus, they would have hanged him". At the end of the song, Benedick could get up to leave, only to fall in to the first trap set for him as Don Pedro says "What was it you told me today, that your niece Beatrice was in love with Signor Benedick?". ...read more.

However he could hastily lose this arrogance when he says, "they say I shall bear myself proudly" as if to deny them the satisfaction of being right. There is again irony in this soliloquy as Benedick, listing Beatrice's loveable qualities, lists the exact same qualities he claimed immunity to in his first soliloquy. Throughout the speech he seems to be trying to justify his feelings for Beatrice. He even goes so far as to say "The world must be peopled" as though he were doing the world a favour. He also tries to void his previous declaration that he would die a bachelor by saying he did not think he would "live till I were married". At Beatrice's entrance, I think Benedick hastily trying to look mildly seductive could create some visual humour. This would create the dramatic irony that while Beatrice is completely bemused by his behaviour, the audience would understand what he doing. Shakespearean audiences would generally expect some visual humour in his comedies. For example, there is often a dog sequence to provide some slapstick in Shakespeare's comedies.; ...read more.