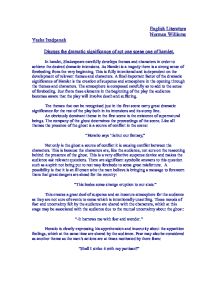 Discuss the dramatic significance of act one scene one of hamlet.

English Literature Norman Williams Yasha Izadpanah Discuss the dramatic significance of act one scene one of hamlet. In hamlet, Shakespeare carefully develops themes and characters in order to achieve the desired dramatic intensions. As Hamlet is a tragedy there is a strong sense of foreboding from the very beginning. This is fully intentional and is dependent on the development of relevant themes and characters. A final important factor of the dramatic significance of Hamlet is the creation of suspense and atmosphere in the opening through the themes and characters. The atmosphere is composed carefully so to add to the sense of foreboding. Just from these elements in the beginning of the play the audience becomes aware that the play will involve death and suffering. The themes that can be recognised just in the first scene carry great dramatic significance for the rest of the play both in its intensions and its storey line. An obviously dominant theme in the first scene is the existence of supernatural beings. The company of the ghost determines the proceedings of the scene. Like all themes the presence of the ghost is a source of conflict in the scene: "Horatio says 'tis but our fantasy," Not only is the ghost a source of conflict it is causing conflict between the characters. This is because the characters are, like the audience, not sure on the reasoning behind the presence of the ghost. ...read more.

In conclusion the ghost and theme of paranormal activity is not only used as a symbolic icon but also as a device to help create a strong sense of foreboding and fear. This supports the already present theme of fear within the play as the characters are quite obviously apprehensive of the situation. This maybe for reasons such as the setting of the first scene, this is expressed by the characters within the first words of the play: "Who's there?" Bernardo is quit clearly anxious at this moment in more than likely due to the fact that he is a guard on a castle wall at night. So immediately the audience are aware that the guards are apprehensive depending on how the scene would be set on stage. If made clear that they were on a castle wall in almost total darkness, it would create a tense atmosphere where the audience are almost being told within the first words of the play that something bad is going to happen. Another very prominent theme in Hamlet is the matter of power. The play is obviously set at a time where the monarchy is an important factor politically, "god save the king", So a the chain of being is possibly in effect, however we are made aware that the late king's son is not in fact on the throne. ...read more.

Such as power and conflict, this is done when they talk about kingship and political situation through the dialogue. The minor characters are the main source exposition for the circumstances and history relevant to the plot. Horatio a much more dominant character has a more of a symbolic role and contributes to the moods and creation of suspense. Horatio has an obviously higher status through his more educated and wealthier individual: "Thou art a scholar" Horatio being educated is the front man when communicating with the dead king so his decisions have a certain amount or control over the scenes proceedings. The most substantial effect that Horatio has on the atmosphere is when his educated, respected, non-superstitious, brave persona, "Horatio says it is but our fantasy", and is reduced in status through fear: "How now, Horatio! You tremble and look pale. Is not this something more than fantasy? What think you on it? This heightens the effect of the ghost as it can diminish a strong, dominant and still respected character. In conclusion Shakespeare uses a range of devices to stress the different themes and the dominance of the ghost. Such as imagery with the contrast of the ghost and nature, characters for exposition and creating mood and the use of language to aid these elements. These factors make the opening of Hamlet very tense and educational for an audience as they become aware of the situation with relative depth and still are aware of the strong sense of foreboding. ...read more.