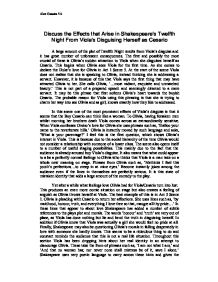 Discuss the Effects that Arise in Shakespeare&amp;#146;s Twelfth Night From Viola&amp;#146;s Disguising Herself as Cesario

Discuss the Effects that Arise in Shakespeare's Twelfth Night From Viola's Disguising Herself as Cesario A large amount of the plot of Twelfth Night results from Viola's disguise and it has great number of unforeseen consequences. The first and possibly the most crucial of these is Olivia's sudden attraction to Viola when she disguises herself as Cesario. This begins when Olivia sees Viola for the first time. As she comes to declare the Duke's love for Olivia in Act 1 Scene 5. At the start of the scene Viola does not realise that she is speaking to Olivia, instead thinking she is addressing a servant. However, it is because of this that Viola says the first thing that may have attracted Olivia to her. She calls Olivia, '...most radiant, exquisite and unmatched beauty.' This is not part of a prepared speech and seemingly directed to a mere servant. It may be this phrase that first softens Olivia's heart towards the boyish Cesario. ...read more.

Yet after a while what feelings love Olivia had for Viola/Cesario turn into lust. This produces an even more comic situation on stage but also creates a feeling of anguish as Olivia throws herself at Viola. The best example of this is in Act 3 Scene 1. Olivia is pleading with Cesario to return her affections. She uses lines such as, 'by maidhood, honour, truth, and everything I love thee so that, maugre all thy pride...' In these lines that appear to about love Shakespeare has added a number of subtle references to the plays plot and morals. The words 'honour' and 'truth' are very out of place, as Viola has done nothing but lie and bend the truth in disguising herself. In addition if Olivia knew that Viola was actually a girl she would feel no pride at all. Finally, Shakespeare may also be questioning Olivia's morals in falling desperately in love with someone she hardly knows. ...read more.

It is of course completely ludicrous that he would agree to marry someone he has never set eyes on before yet he appears completely overwhelmed. 'This is the air, that is the glorious sun.' The first line of his speech sums up his supposed feelings for Olivia. She is of course deliriously happy saying, 'Then lead the way...and heavens so shine.' Sebastian appears to be only vaguely aware of what is taking place and even goes so far as to question his sanity. 'To any other trust but that I am mad.' This scene is very typical of Olivia's switching affections from Viola to Sebastian with seemingly no founding for the love. The fact that Sebastian has never met her before adds to the ridiculousness of the scene. Shakespeare relies heavily on the audience's suspension of disbelief in order to create a marriage of questionable morals. In my opinion his main reason for doing this is to produce a happy to the play, several marriages. Overall, Viola's disguise is used for a vast number of comic devices and is probably the singularly important device in the plot. ...read more.