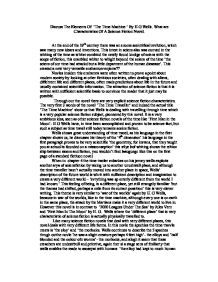 Discuss The Elements Of 'The Time Machine ' By H G Wells. What are Characteristics Of A Science Fiction Novel.

Discuss The Elements Of 'The Time Machine ' By H G Wells. What are Characteristics Of A Science Fiction Novel. At the end of the 19th centrey there was an enoms sceintifical revlution, witch saw many new idears and inventions. This intest in sciens also was conved in the whiting of the time as whiter combind the newly found knolge of sciens with the scope of fiction, this enanbled whiter to whight beyond the sciens of the time 'the sciens of our time had attackd but a little deparment of the human dieaease'. This created a new very versatile enshamuer-enjama?? Novles insiden this enshamra were often written to prove a point about modern society by looking at other fictitious societies, often dealing with aliens, diffehrent life and different places, often made predictions about life in the future and usually contained scientific information. The attraction of science fiction is that it is written with sufficient scientific basic to convince the reader that it just may be possible. Through out the novel there are very explicit science fiction characteristics. The very first 3 words of the novel 'The Time Traveller' and indeed the actual title 'The Time Machine' show us that Wells is dealing with travelling through time which is a very popular science fiction subject, pioneered by this novel. ...read more.

It had committed seuiside.' I think that Wells' novel the time machine in a very accomplished science fiction novel. Not only does throughout the core of the story he fulfils the criteria for a science fiction novel, both in comparison to other novels and by definition, but he also makes it very believable. He accomplishes this in many ways, the language through out the book persuades you that the time traveller has actually been to the future and back, also the way Wells has such a sound scientific knowledge and use very scientific language improves the realism a lot 'I reached a strong suggestion of an extensive system of sub teraineyn venterlaton' it make you bileve tat it is achlley the time trave spwaking beceauns wells gives enugh tenicnal laungueg to perswade you that the man whiting the book is intelligent enugh to make a time machine. 'ment sliping like a vapor thrugh they interstices of intervening substances.' I also believe that it is very clever the way Wells make even his own characters not believe the time travellers story, this may seem like a bold thing to do, seen as he is trying to make it as believable as possible, but in ...read more.

This would be in the form of an activity day totally organised by the PTA. Once this has been agreed full details would be planned but in principle, PTA would set up a series of activities, AM for lower school, PM for upper. Each class would be brought out by teacher and do set of activities. They would be sponsored for completing the course. Large Birthday dog would be given as prize to the one that made the most overall effort with the activities, sponsors and returning the money on time. This would be put up in the hall as incentive a couple of weeks before event. As Summer Fayre cancelled, a further challenge day was requested after SATS around the may bank holiday time. Again in principle this would involve all children paying �1 to wear non-uniform and to have a go at 'beat the goalie ' and a netball challenge. Each class brought out to area and each child given 3 goes at the goal and 3 goes at netball. All those that score more than 3 times out of possible 6 on both events has name go in hat to be drawn for overall prize. Prize would be for Foundation, KS1 and KS2. *PLAYGROUND EQUIPMENT Equipment has now been received for playground for Foundation. Next meeting Tuesday 2nd March.h ...read more.