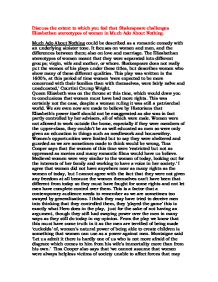 Discuss the extent to which you feel that Shakespeare challenges Elizabethan stereotypes of women in Much Ado About Nothing.

Discuss the extent to which you feel that Shakespeare challenges Elizabethan stereotypes of women in Much Ado About Nothing. Much Ado About Nothing could be described as a romantic comedy with an underlying sinister tone. It focuses on women and men, and the differences between them; also on love and marriage. The Elizabethan stereotypes of women meant that they were separated into different groups; virgin, wife and mother, or whore. Shakespeare does not really put the women of his plays under these titles, but describes women who show many of these different qualities. This play was written in the 1600's, at this period of time women 'were expected to be more concerned with their families than with themselves, were fairly na�ve and uneducated,' Courtini Crump Wright. Queen Elizabeth was on the throne at this time, which would draw you to conclusions that women must have had more rights. This was certainly not the case, despite a woman ruling it was still a patriarchal world. We are even now are made to believe by Historians that Elizabeth's power itself should not be exaggerated as she was in fact partly controlled by her advisers, all of which were male. Women were not allowed to work outside the home, especially if they were members of the upper-class, they couldn't be as well educated as men so were only given an education in things such as needlework and housewifery. Women's opportunities were limited but to say they were sheltered and guarded as we are sometimes made to think would be wrong, Tina Cooper says that the women of this time were 'restricted but not as oppressed as movies and many romantic films would have us believe. Medieval women were very similar to the women of today, looking out for the interests of her family and working to have a voice in her society.' I agree that women did not have anywhere near as many rights as the women of today, but I cannot agree with the fact ...read more.

Our next category of women is 'Pathetic Women', Hero lets men rule her the whole way through the play, Carol Thomas Neely says that 'Patriarchal marriage customs conveniently coalesce with romantic rhetoric, enabling him to maintain Hero as an object of social exchange and possession.' She is seen as a man's possession, "Leonato's Hero, your Hero, every man's Hero," she is what every man wants a women to be like, she makes men feel like Heroes, and Shakespeare makes a deliberate pun on her name to get this point across. In my opinion this makes her seem quite 'pathetic' as she just tries to be what men want her to be. I do not think she is stupid; she probably is intelligent, as she knows that she has to act this way to survive in the male dominated world in which she lives, though she does not get a chance to show it. I do not really think that Shakespeare is challenging the Elizabethan stereotypes through Hero, as she is pretty much everything the stereotypes make us believe the women were. I believe that Shakespeare uses her as an example of what women were supposed to be like and as a contrast to the other women. Although at the same time she isn't like that in the company of women, this shows that maybe women tried to be more passive in front of men but underneath it all they were outspoken and confident. Outspoken females is exactly what you think of when you think of Beatrice, she says what she wants and does not think of the consequences or what anyone else thinks about her. 'She does not hide behind the conventions of the times which demand that a woman to be sweet and fluffy, rather than outspoken and determined,' Courtini Crump Wright gives us the perfect definition of Beatrice. She doesn't try to please men the ways that Hero does, she is totally herself all the time, no matter where she is or who she is with. ...read more.

This is very true in Much Ado About Nothing as in my opinion Beatrice is the heroine. Wright says that, 'Beatrice is actually a much more prominent figure in the play and the lives of the other characters.' Even though at the beginning Hero seems to be the main focus of the play, by discussion of her impending marriage to Claudio, by the end it is Beatrice. Some feminist critics believe that Shakespeare undermines Beatrice's character through the kiss with Benedick at the end of the play. If this was true it would mean that Shakespeare was not challenging the stereotypes as Beatrice would have slipped back into the stereotype. I believe that she will remain the same and there is no way that love will change her; she has just fallen in love, this will not weaken her character in any way. Especially as she has a man who respects her and allows her to be the way that she wants to be, without trying to change her. Hero is the one who remains to be ruled by men, Claudio wins as he still gets her after everything, and this makes me loose all my respect for her. Claudio and Benedick both get what they want in the end, but I don't think that this means that the men have won because Beatrice gets everything that she wants; she has found love though still is as outspoken as ever, she remains herself. Shakespeare knows that he cannot be too forward about the subject as it was still seen as quite taboo for a woman to be so outspoken and opinionated. It certainly wasn't the beginning of the emancipation and empowerment of women, though he does show that times were changing and women were starting to get stronger, but as I said before women always have had a certain degree of power over men no matter how much they tried to deny it. ...read more.