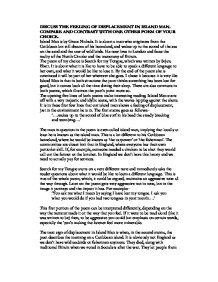 Discuss the feeling of displacement in Islandman.

DISCUSS THE FEELING OF DISPLACEMENT IN ISLAND MAN. COMPARE AND CONTRAST WITH ONE OTHER POEM OF YOUR CHOICE. Island Man is by Grace Nichols. It is about a man who originates from the Caribbean but still dreams of his homeland, and wakes up to the sound of the sea on the sand and the caw of wild birds. He now lives in London and faces the reality of the North Circular and the monotony of Britain. The poem of my choice is Search for my Tongue, which was written by Sujata Bhatt. It is about what it is like to have to be able to speak a different language to her own, and what it would be like to lose it. By the end of the poem she is convinced it will be part of her wherever she goes. I chose it because it is very like Island Man in that in both situations the poet thinks something has been lost for good, but it comes back all the time during their sleep. ...read more.

This first portion of the poem can be interpreted differently, depending on the way the narrator reads it or the way that you feel. If it were to be read aloud (like it was written to be) then, to be aggressive you could but emphasis on certain words, especially the 'you's making the listener feel more vulnerable. The next sign of displacement in Island Man is when, in the second stanza, the poet describes the morning on a Caribbean island. It is obviously not England as we don't have wild seabirds or fishermen anymore. They died, along with traditional Britain when we voted in Socialists after the war. They let people from all different backgrounds into our country without speaking a word of English. This trend has continued and is at an all time high as we speak. For example:- '....wild seabirds and fishermen pushing out to sea the sun surfacing defiantly from the east of his small emerald island....' To start with in the centre of London one can rarely see the sun not always because it is not out but the many overbearing buildings shield its rays. ...read more.

The next stanza in Island Man is where the island man begins to wake up and smell another London day. 'Comes back to sand of a grey metallic soar to surge of wheels to dull North Circular roar....' This shows that he has his thoughts disturbed every morning by the cars on the North Circular. It is this that awakes him and stops him from reliving his island life. This is in contrast to Search for my Tongue where the poet's feelings continue uninterrupted throughout the whole poem. She is allowed to tell her story without being broken up by passing traffic or people. Both work in their own ways to great effect. The break in Island Man is good because it help to change from one beautiful scene to an unexciting one. Finally in Island Man the writer reveals that the sound mentioned in the first stanza was not wave but his pillow. It has no particular ending. Search for my Tongue is an absolute difference in that it has a clearly defined ending. The poet closes on the note that the tongue has reappeared. ...read more.