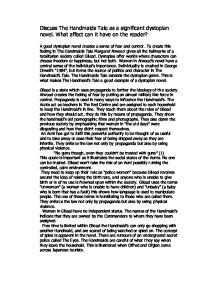 Discuss The Handmaids Tale as a significant dystopian novel. What affect can it have on the reader?

Discuss The Handmaids Tale as a significant dystopian novel. What affect can it have on the reader? A good dystopian novel creates a sense of fear and control. To create this feeling in The Handmaids Tale Margaret Atwood gives all the hallmarks of a totalitarian society called Gilead. Dystopias offer worlds where characters can choose freedom or happiness, but not both. Women in Atwood's novel have a central sense of the individual's importance. Individuality is crushed in George Orwell's "1984", but forms the source of politics and character in The Handmaid's Tale. The Handmaids Tale extends the dystopian genre. This is what makes The Handmaid's Tale a good example of a dystopian novel. Gilead is a state which uses propaganda to further the ideology of the society. Atwood creates the feeling of fear by putting an almost military like force in control. Propaganda is used in many ways to influence the Handmaid's. The Aunts act as teachers in The Red Centre and are assigned to each household to keep the Handmaid's in line. They teach them about the rules of Gilead and how they should act, they do this by means of propaganda. ...read more.

"yes, we are very happy", I murmur." This quote shows how fear is controlling Gilead. Offred feels that if she did not reply to the tourists, it is as good as saying no. Doing this may lead to further punishment. The Characters Offred is the narrative voice in the novel. This gives us an individual perspective of Gilead. She is also the protagonist of the novel, and we are told the entire story from her point of view, experiencing events and memories as vividly as she does. She tells the story as it happens, and shows us the travels of her mind through flashbacks to give us background information about her previously life. Offred is intelligent, perceptive and kind. She possesses enough faults to make her human, but not so many that she becomes an unsympathetic figure. She also possesses a dark sense of humour, a graveyard wit that makes her descriptions of the bleak horrors of Gilead bearable. Like most of the women in Gilead, she is an ordinary woman placed in an extraordinary situation. She is hardly a feminist champion: she had always felt uncomfortable with her mothers activism. ...read more.

She is the only character that stands up to authority directly by making one failed escape attempt and the second a success. Moira represents an alternative to the meek fate that most of the Handmaid's adopt. My original argument stated that The Handmaid's Tale is a good example of a dystopian novel. I have come to the conclusion that my hypothesis is correct, as The Handmaid's Tale includes all the features of a good dystopian novel. Margaret Atwood does this by telling us the story through the eyes of Offred who is experiencing the life of Gilead. She gives good descriptions of Offred's emotional status and very cleverly interprets an opposite to what Gilead wants, Moira. Offred gives vivid descriptions of what she goes through, this makes the reader feel sympathy for her. Atwood also describes things that are both familiar and unfamiliar to us. This is good as it makes the reader think a little and use some imagination to the unfamiliar aspects of the story, though some of these aspects of the story are quite shocking. It is also good that Atwood makes Offred's character progress throughout, from a weak woman who wants to avoid confrontation and just live by the rules, to a woman who is prepared to take risks for her benefit. ...read more.