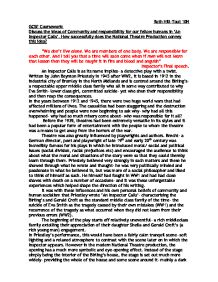 Discuss the ideas of Community and responsibility for our fellow humans in 'An Inspector Calls'. How successfully does the National Theatre Production convey this idea?

Ruth Hill-Tout 10N GCSE Coursework: Discuss the ideas of Community and responsibility for our fellow humans in 'An Inspector Calls'. How successfully does the National Theatre Production convey this idea? "We don't live alone. We are members of one body. We are responsible for each other. And I tell you that a time will soon come when if men will not learn that lesson then they will be taught it in fire and blood and anguish" Inspector's Final speech. An Inspector Calls is as its name implies- a detective play with a twist. Written by John Boynton Priestely in 1945 after WW2, it is based in 1912 in the industrial city of Bromley in the North Midlands and is centred around the Birling's- a respectable upper middle class family who all in some way contributed to why Eva Smith- lower class girl, committed suicide- yet who shun their responsibility and then reap the consequences. In the years between 1912 and 1945, there were two huge world wars that had affected millions of lives. The casualties had been staggering and the destruction overwhelming and people were now beginning to ask why- why had all this happened- why had so much misery come about- who was responsible for it all? Before the 1939, theatres had been extremely versatile in its styles and it had been a popular form of entertainment with the people to whom the theatre was a means to get away from the horrors of the war. Theatre was also greatly influenced by playwrights and authors. Brecht- a German director, poet and playwright of late 19th and early 20th century was incredibly famous for his plays in which he introduced moral/ social and political issues (social division, racial prejudices etc) and encouraged the audience to think about what the moral and situations of the story were so that they could thereby learn through them. ...read more.

This is mainly apparent in Shelia's confession, in which instead of turning and speaking to the Inspector who is questioning her, she stops and turns to us the audience- the world. She is not mentally conscious that we are there but knows what she is doing- she is letting the world into her life instead of trying to block it out. Another example of collaborating with the audience is in Eric's reentrance after it has been brought to light that Eva Smith was Eric's mistress and carried his baby. On the stage dry ice is put into use and a thick smoke screen envelopes one side of the stage from which a crowd of lower class people appear in - led by the Inspector- more witnesses for the Birling's realisation of their responsibility. It is then that Eric runs on stage and is faced by the people and his family and more importantly the true horror of his crime. At that moment the lights on the audience come on and are all visible whereas before they had been in the dark. This symbolizes that though we may not have been apparent before, we have always been there- judging and watching them but only when the truth is finally unraveled do they finally accept us. All the way through the play, Eva Smith has been the focus point of the performance- the scapegoat of the Birling's and Gerald Croft's selfish, vindictive, greedy and greater powers. She is fired by Mr. Birling for wanting a higher salary, fired again when she had thought herself happy and settled through Sheila's jealous and selfish temperament, kept, though gratefully as a mistress by Gerald, made pregnant and even more wretched by Eric and finally pushed over the edge by Mrs. Birling's refusal for the smallest pitiable amount of help she could have granted through her prejudice and scorn. Of course as Birling stated "- If we were all responsible for everything that happened to everyone we'd has anything to do with, it would be very awkward" For none of them actually made Eva Smith commit suicide did they? ...read more.

It is not who delivers the message that is important but the message itself. This is what Priestley tries to put across to us. Everybody has a huge responsibility to everyone- not just to them they love- but to all. We all have to help and aid others even when we think it is not up to us to do it. We can not ignore the misery or pain of others for if we do- who shall help us when we are in dire straights? We choose such a path and teach our children who carry the chain on, how can communities flourish and good deeds occur when we are all self centered and narrow minded? We have to work together and collaborate or else horrors like WW1 and 2 will simply keep repeating until we learn. This is not just aimed at the 1945 audience who Priestley wrote the play for, but is relevant in today's world and tomorrow's world. Peace and harmony can only be achieved through understanding of each other. Disputes and wars and deaths today are all caused because of people's greed or lusting for power, or simply because they do not understand each other and do not try to. If we do not learn this lesson now and try to right the wrong, we will be punished again and again- Titanic the greatest ship of her time was lost through our arrogance that we were the best and undefeatable- her loss, WW1 and WW2 were our punishments. Millions died and it was no ones fault but our own. The National Theatre production simply reminds us of this, which is a valuable reminder what with the war in Iraq and the tensions rising due to fighting and terrorism. Priestley shows us that however foolishly we act, however terribly, we will always get a second or even third chance but it is up to us whether we take them and learn- or don't and suffer the consequences. ...read more.