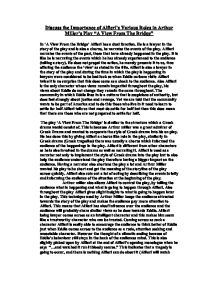 Discuss the Importance of Alfieri's Various Roles in Arthur Miller's Play &quot;A View From The Bridge&quot;

Discuss the Importance of Alfieri's Various Roles in Arthur Miller's Play "A View From The Bridge" In 'A View From the Bridge' Alfieri has a dual function. He is a lawyer in the story of the play and is also a chorus, he narrates the events of the play. Alfieri narrates the events of the past, those that have already happened in the play. It is like he is narrating the events which he has already experienced to the audience (telling a story). He does not propel the action, he merely presents it to us, thus offering the audience the 'view' as stated in the title. Alfieri is also a lawyer in the story of the play and during the time in which the play is happening in lawyers were considered to be bad luck so when Eddie carbons visits Alfieri twice it is no surprise that this does come as a shock to the audience. Also Alfieri is the only character whose views remain impartial throughout the play, his views about Eddie do not change they remain the same throughout. The community in which Eddie lives in is a culture that is suspicious of authority, but does feel strongly about justice and revenge. Yet we are told that the community wants to be part of America and to do this those who live in it need to learn to settle for half Alfieri tells us that most do settle for half but then this does mean that there are those who are not prepared to settle for half. ...read more.

Alfieri also has the power to keep the audience interested by keeping the audience wanting to know what is going to happen next he does this by giving slight hints but does not reveal all. For instants in the scene where Eddie kisses Catherine and then kisses Rudolpho, the audience are shocked at what they have seen. Eddie walks out of the house and the audience are keen to see where he goes next. But almost instantly the spotlight goes onto Alfieri, who remains on stage throughout the play, who then talks to the audience. "On December twenty-seventh I saw him next.....I kept wanting to call the police......nothing at all had really happened." By doing this a lot the audience could turn to dislike Alfieri but the stay with him and listen to whatever he has got to say as when he does say something it is for the benefit of the audience. He also gains trust by not just narrating the play but also being part of it this makes the audience think that he knows all the other characters well and his views will be accurate. When he becomes a narrator again the audience get to hear what his thoughts are for example when he say to the audience ".....I could have finished the whole story that afternoon. It wasn't as though there was a mystery to unravel." This indicates that Alfieri knows a lot about where the play is going as he may have seen it happen before and he desperately wants to stop it but he can not. ...read more.

Revenge is another thing those who do not obey the community law are punished within the community and this is proven when Marco kills Eddie. I think that Alfieri is also a very important device that is used by Arthur Miller to ensure the audience get the full impact of the play and maybe try to cooperate some of its teachings into their own lives and to accept other people from different cultures. Alfieri explains all the situations well and without him the audience would struggle to piece together the playas they would not have received the background knowledge about the society which Alfieri tells of a the beginning of the play. Alfieri is like Arthur millers mouthpiece as he is narrating what Arthur Miller wants to say to the audience, a form of Arthur Miller. Alfieri also expresses the mixed feeling Miller would have had about the character of Eddie. Having Alfieri also lets the audience see that Eddie placed his individual needs above those of his society and Miller believes that to connect in a society you need to compromise meaning put your community first. Also in the play Alfieri says "....settle for half" meaning that if you want to be accepted by America which is what this community wanted and if you want to survive the you need to learn to compromise. This is what Eddie forgot and he selfishly put all his needs before others. As Alfieri suggests if he had done differently then he may still be alive. ...read more.