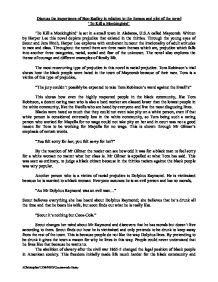 Discuss the importance of Boo Radley in relation to the themes and plot of the novel 'To Kill a Mockingbird'.

Discuss the importance of Boo Radley in relation to the themes and plot of the novel 'To Kill a Mockingbird' 'To Kill a Mockingbird' is set in a small town in Alabama, U.S.A called Maycomb. Written by Harper Lee this novel depicts prejudice that existed in the thirties. Through the young eyes of Scout and Jem Finch, Harper Lee explores with exuberant humour the irrationality of adult attitudes to race and class. Throughout the novel there are three main themes which are, prejudice which falls into another three categories, racial, social and fear of the unknown. The novel also explores the theme of courage and different examples of family life. The most reoccurring type of prejudice in this novel is racial prejudice. Tom Robinson's trial shows how the black people were hated in the town of Maycomb because of their race. Tom is a victim of this type of prejudice, "The jury couldn't possibly be expected to take Tom Robinson's word against the Ewell's" This shows how even the highly respected people in the black community, like Tom Robinson, a decent caring man who is also a hard worker are classed lower than the lowest people in the white community, like the Ewells who are hated by everyone and live the most disgusting lives. Blacks were hated so much that they could not even take pity on a white person, even if that white person is considered extremely low in the white community, so Tom being such a caring person who worked for Mayella for no wage could not take pity on her and in court was not a good reason for Tom to be working for Mayella for no wage. This is shown through Mr Glimer's emphasis of certain words. "You felt sorry for her, you felt sorry for her?" By the reaction of Mr Gilmer the reader can see how odd it was for a black man to feel sorry for a white woman no matter what her class is. ...read more.

Nathan Radley, Boo's father finds out about this potential friendship and tries to put a stop to it, he says, "Yes, I filled it up" Nathan tried to put and end to the potential friendship between the children and Boo, Nathan tells Jem that he filled up the knot hole because the tree is dying. Atticus tells Jem different. "He stood there until nightfall... I saw he had been crying, his face was dirty n the right places". Jem was crying because he had realised that Nathan Radley had purposely blocked up the knot hole to prevent friendship between Boo and themselves. Boo courage is shown again as he continues to befriend the children. "Boo Radley, you were so busy looking at the fire you didn't know when he put the blanket around you". Atticus told the children that Boo put the blanket around Scout as a sign of friendship, even though Nathan does not ant them to be friends. Towards the end of the novel (chapter 28) Boo shows physical courage, when Jem and Scout are attacked by Bob Ewell, without a thought in the world, without knowing if he had a weapon or not, Boo Radley came to the rescue! This courage shown by Boo resulted in saving the life of Jem and Scout. It also led to the death of Bob Ewell. Because of Boo's courage he was able to become friends with Jem and Scout. The theme of family has a great relevance to this novel. It is a central theme and is constantly reoccurring throughout the novel. Firstly there is the Finch family; they are the first family described in the novel. Originally from Cornwall, they made their way to Alabama USA. The only member of their family that they could trace back was 'Simon Finch'. He was a wealthy man, "Simon made a pile practicing medicine" Because he was a wealthy man he had a good deal of social status, his status would have been passed down through the generations, they are very proud of their name. ...read more.

This repeated image and its key symbol of an innocent creature make it a strong motif. A Mockingbird is a type of Finch, a small plain bird with a beautiful song which 'mocks' or mimics other birds' songs. The Mockingbird represents this innocence and kindness because it does not harm anyone, it does not make nests in the chimneys nor does it eat the crop, it just sings with a beautiful voice. The Mockingbird first appears in chapter 10 of the novel, when Atticus tells the children how to use their shotguns, "Shoot all the blue jays you want, if you can hit 'em, but it's a sin to kill a Mockingbird". Scout is surprised to hear Atticus, who is usually non-judgemental calling something a 'sin'. Miss Maudie Atkinson explains to Scout what Atticus really means, because Mockingbirds are neither harmful nor destructive, and only make nice music for people to enjoy so it's wrong to kill one. Tom Robinson symbolises the Mockingbird symbol, having committed no crime and yet being punished simply because of his race. Tom was killed by the prison guards when attempting to escape from jail. Through his death he is directly linked to the Mockingbird, this is because of Mr Underwood's description, "Mr Underwood simply figured it was a sin to kill cripples, be they standing, sitting or escaping". Tom caused no harm nor was he destructive all he did was work for Mayella out of the goodness of his heart. It is through the innocence and harmlessness of Boo that he is compared to the Mockingbird. Scout understands through meeting Boo that he is harmless and nothing like what they had first thought of him. Scout is considerate towards Boo and protects him from the comments of Maycomb's people, "If Miss Stephanie Crawford was watching from her upstairs window, she would see Arthur Radley escorting me down the sidewalk". She protects his pride by making it out as though he was escorting her. Scout no longer refers to Arthur Radley as Boo but as Arthur Radley. Hopefully this is a start to a wonderful friendship! JChristopher/1234/9033/Coursework-Essay ...read more.