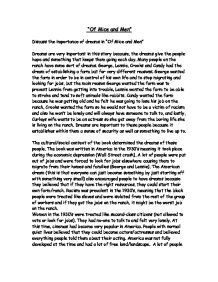 Discuss the importance of dreams in &quot;Of Mice and Men&quot;

"Of Mice and Men" Discuss the importance of dreams in "Of Mice and Men" Dreams are very important in this story because, the dreams give the people hope and something that keeps them going each day. Many people on the ranch have some sort of dreams. George, Lennie, Crooks and Candy had the dream of establishing a farm but for very different reasons; George wanted the farm in order to be in control of his own life and to stop migrating and looking for jobs, but the main reason George wanted the farm was to prevent Lennie from getting into trouble, Lennie wanted the farm to be able to stroke and tend to soft animals like rabbits. Candy wanted the farm because he was getting old and he felt he was going to lose his job on the ranch, Crooks wanted the farm so he would not have to be a victim of racism and also he won't be lonely and will always have someone to talk to, and lastly, Curleys wife wants to be an actress so she get away from the boring life she is living on the ranch. Dreams are important to these people because it establishes within them a sense of security as well as something to live up to. ...read more.

The fact that Lennie is always getting them into trouble and George always has to make things right for them "So I comes running, an' by that time Lennie's got scared... I socked him over the head with a fence picket to make him let go..."this makes George want to establish the farm so he could keep Lennie in a safe place, where he wouldn't get harmed. Candy is another character in the book that helps us to understand the importance of dreams. He is old and has lost a hand. He has just witnessed the death of his dog (a life long friend) and feels he would soon be sacked from the ranch because he is not useful "When they can me here I wisht somebody'd shoot me... I won't have no place to go, an' I can't get no more jobs..." He wants the farm because he knows there; he will not be able to get sacked because he is old and crippled. He gets involved in the dream of George and Lennie by giving them his money that he had been saving from his injury and his savings (monthly wages). "...they give me two hundred an' fifty dollars cos' of my hand. An' I have got fifty more saved right up in the bank...fifty more comin' the end a the month." ...read more.

Met him out to the Riverside Dance Palace that same night". She has this dream because the people in the movies had a life of glamour and she wanted to live like that. She also has this dream because she is not treated fairly on the ranch and has no-one to talk to (apart from Curley) "Ain't I got a right to talk to nobody? Whatta they think I am, anyways? ..." So because of this, she is always seeking attention in the wrong places which eventually lead to her death. Her dream was shattered when she let Lennie stroke her hair. In death, she look very peaceful unlike when she was alive and had problems. The characters of the book "Of Mice and Men" have dreams at some time of their life. They have these dreams so as to escape the hardship of life in the 1930's.They also had dreams for the urge for something good that could make them feel very good about themselves. Some of the dreams maybe were not meant to come true (Curleys wife's dream) but we come to see how close George and Lennie come to achieving theirs. If Curley's wife didn't seek for attention and Lennie did not have the fascination for soft things, they would have had the chance to have another way of life. ...read more.