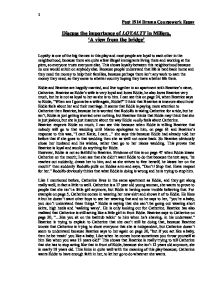 Discuss the importance of LOYALTY in Millers,'A view from the bridge' Loyalty is one of the big themes in this play and most people are loyal to each other

Post 1914 Drama Coursework Essay Discuss the importance of LOYALTY in Millers, 'A view from the bridge' Loyalty is one of the big themes in this play and most people are loyal to each other in the neighborhood, because there are quite a few illegal immigrants living there and working at the piers, so everyone trusts everyone else. This shows loyalty between this neighborhood because no one would snitch on anybody else. Because people understand that life is hard back home and they need the money to help their families, because perhaps there isn't any work to earn the money they need, so they come to a better country hoping they have a better life there. Eddie and Beatrice are happily married, and live together in an apartment with Beatrice's niece, Catherine. Beatrice as Eddie's wife is very loyal and loves Eddie, he also loves Beatrice very much, but he is not as loyal to her as she is to him. I can see this on page 24, when Beatrice says to Eddie, "When am I gonna be a wife again, Eddie?" I think that Beatrice is insecure about how Eddie feels about her and their marriage. It seems that Eddie is paying more attention to Catherine then Beatrice, because he is worried that Rodolfo is taking Catherine for a ride, but he isn't, Eddie is just getting worried over nothing, but Beatrice ...read more.

Another character who is part of this is, Rodolfo. He and his brother, Marco, are illegal immigrants from Italy. They are Beatrice's cousins and who have come over to America to work and earn some money to send back home, for their poor families. From the first time Rodolfo met Catherine he really liked her, and as Catherine got to know Rodolfo, she began to like him, a lot. Eddie soon realizes that there is something going on between Catherine and Rodolfo, because they are going out a lot together and coming home late. Eddie feels jealousy towards Rodolfo because he feels like Catherine is never at home anymore and she is always out with Rodolfo. Eddie is obviously jealous of Rodolfo, and he doesn't really like him as much as he did, this is because Eddie thinks that all Rodolfo wants is his papers so he could stay in America and become an American citizen. This is not true at all, Rodolfo and Catherine are in love and that is why they want to get married. When Eddie found this out he really didn't know what to do, but he did know that he wasn't going to attend their wedding! This made Catherine really upset and she felt as thought she had lost her faith in Eddie, because he can't be happy for her; whoever she would be with. ...read more.

I kept them, I gave them the blankets off my bed!" by saying this he is still trying to explain himself to everyone, but they just turn away and walk off, even his close friends, Louis and Mike. Eddie now learns how important trust is and he also realizes that the neighborhood has lost their trust and loyalty in him. In conclusion I have found out that in this play there is a lot of trust and loyalty between; Catherine and Eddie and Rodolfo, Beatrice and Eddie, and Alfieri and Eddie, but in the end there is not so much trust between Eddie and the neighborhood, more like betrayal. In that neighborhood there are quite a few immigrants working on the piers, but people keep it to themselves, because no one wants to snitch. This proves there is trust between everyone in the neighborhood. I think that Miller's point of this play was to, actually make people realize that life isn't just all happy endings but there are some issues which need to be talked about, like trust and loyalty in a illegal immigrant environment. I think this quote I got from the back of the book explains my point, "all the plays that I was trying to write were plays that would grab the audience by the throat and not release them, rather than presenting an emotion which you could observe and walk away." - Arthur Miler. ?? ?? ?? ?? 1 ...read more.