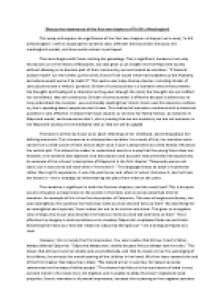 Discuss the importance of the first two chapters of &quot;To Kill a Mockingbird&quot;.

﻿?Discuss the importance of the first two chapters of To Kill a Mockingbird? This essay will explore the significance of the first two chapters in Harper Lee?s novel, To Kill a Mockingbird. I will be studying the narrative style, different themes within the book, the mockingbird symbol, and how social context is portrayed. The novel begins with Scout reciting her genealogy. This is significant, because it not only introduces us to the history of Maycomb, but also gives us an insight into the Maycomb society without allowing us to become part of their community; we are treated as outsiders. ?If General Jackson hadn?t run the Creeks up the creek, Simon Finch would never have paddled up the Alabama, and where would we be if he hadn?t?? This quote uses many literary devices, including stream of consciousness and a rhetoric question. Stream of consciousness is a narrative device that presents the thoughts and feelings of a character as they pass through the mind; the thoughts are not crafted nor considered, they are continuous. Stream of consciousness is effective because it allows you to truly understand the narrator - you are literally reading their minds. Scout uses this device to confuse us; she is speaking about people we don?t know. This method of narration combined with a rhetorical question is very effective. ...read more.

You soon realise that Atticus, Scout?s father, always defends Calpurnia. ?Calpurnia always won, mainly because Atticus always took her side.? This shows that Atticus trusts her wholly and unconditionally, and that he invests in her the upbringing of his children; he entrusts the moral learning of the children in her hand. We then learn towards the end of the first chapter that Calpurnia is black. ?We looked at her in surprise, for Calpurnia rarely commented on the ways of white people.? This shows that Atticus is the touchstone of what is true, just and moral in the novel; he is not bigoted, and is unable to abide the town?s ingrained racial prejudice. Scout?s narration is of pivotal importance, because she is passing on her negative opinions of Calpurnia, and we believe her. We put faith in what she says, because she is the narrator, and it is her story. The novel is set in the mid-1930's. ?There was no hurry, for there was nowhere to go, nothing to buy and no money to buy it with, nothing to see outside the boundaries of Maycomb County.? This quotation, near the beginning of Chapter 1, introduces us to Maycomb. This description situates Maycomb as a sleepy Southern town with traditional values and little money. The description provides important clues about the story?s contextual setting: in addition to now-outdated elements such as mule-driven Hoover carts and dirt ...read more.

His life is rendered useless, because of mistakes he made when he was young. His life is devoid of love, acceptance, and kindness; his life is devoid of normality. He is defined by gossip, hearsay and sensationalism. This perpetuates the myths and prejudices surrounding the Radley House. The Radley house is a metaphor for prejudice. ?Inside the house lived a malevolent phantom.? The inhabitants of Maycomb have created false superstitions regarding Boo Radley. Superstition is an underlying cause for the prejudices in Maycomb. Rumours, fear, and superstition drive the society of Maycomb. These lead to default pessimism and causes people to expect the worst. They then fear the things they do not understand; prejudice is a by-product of fear. This ends up as a vicious, never-ending cycle: a cycle of ignorance. Therefore, the inhabitants of Maycomb perpetuate prejudice. Boo Radley is an eponymous character. An eponym is when a title bears the name of a person; Boo Radley is a mockingbird. The mockingbird symbol represents the idea of innocence. Symbols are objects, characters, figures, and colours used to represent abstract ideas or concepts. The title of To Kill a Mockingbird has little connection to the plot, but has significant symbolic meaning in the book. To Kill a Mockingbird is a story of innocents that are destroyed by evil, the ?mockingbird? comes to represent the idea of innocence. Boo Radley can be identified as one of many mockingbirds ? innocents who have been destroyed because of evil. ...read more.