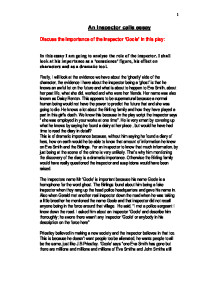 Discuss the Importance of the Inspector 'Goole' in this play:

An Inspector calls essay Discuss the Importance of the Inspector 'Goole' in this play: In this essay I am going to analyse the role of the inspector. I shall look at his importance as a 'conscience' figure, his effect on characters and as a dramatic tool. Firstly, I will look at the evidence we have about the 'ghostly' side of the character, the evidence I have about the inspector being a 'ghost' is that he knows an awful lot on the future and what is about to happen to Eva Smith, about her past life, what she did, worked and who were her friends. Her name was also known as Daisy Renton. This appears to be supernatural because a normal human being would not have the power to predict the future that and she was going to die. He knows a lot about the Birling family and how they have played a part in this girl's death. We know this because in the play script the inspector says " she was employed in your works at one time''. He is very smart by covering up what he knows by saying he found a dairy at her place, but would he have had time to read the diary in detail? This is of dramatic importance because, without him saying he found a diary of hers, how on earth would he be able to know that amount of information he knew on Eva Smith and the Birlings. For an inspector to know that much information, by just being at the scene of the crime is very unlikely. That's why him mentioning the discovery of the diary is a dramatic importance. Otherwise the Birling family would have really questioned the inspector and suspicions would have been raised. The Inspectors name Mr 'Goole' is important because his name Goole is a homophone for the word ghost. The Birlings found about him being a fake inspector when they rang up the head police headquarters and gave his name in. ...read more.

His involvement with the girl is very suspicious as he lived with her whilst aiding her. He allowed her to stay at his friend's house while his friend was away and Gerald was taking sexual pleasures as a payment for his generosity. He is very co-operative while being questioned because he is not hiding anything so he is not cautious in what he says, to the Inspector. Gerald met Eva Smith but knew her as Daisy Renton in a club when he noticed her sitting alone. That's when he took her, helped her and she stayed with her at his friends house during the summer. Eric is an alcoholic. He had a relationship with Eva Smith known as Daisy Renton while she was lonely and vulnerable. He makes love to her and she falls pregnant with his child. They don't get married, as Eva knows that they are not in love. Eric does offer to give Eva some money, which he stole from his dad's office when hearing she will be giving birth to his baby. She refuses to accept this money as she feels she is not a charity and has dignity in herself. When the Inspector tells him about Eva's death he is very shocked and startled we know this because he says "oh god". Only Sheila and Eric have accepted their responsibility, they are fully aware of the impact of the Inspector's message and they seem to have a clearer conscience because of that. Mr Birlings complete ignorance and showing no sympathy makes me very suspicious towards him being involved with Eva's death. Now that I have analysed the characters I would like to consider how the Inspector appears on stage. When I watched the video of ''An Inspector calls'' I noticed that the Inspector was quite unusual in the way he talks to them. I have reason to believe this when he says ''one person and one line of inquiry at a time. ...read more.

He arrives at an awkward time when they are happy and merry to kill the buzz of the house. They were having a nice time until they started getting interrogated by Mr 'Goole'. He departs just before Gerald comes back from his walk outside with information that Mr Goole is a fake Inspector. While he was outside getting some fresh air he met this police officer that he knew and told him about a Inspector 'Goole' and describe him but that police office swore he knew of know one by that name and description so that's how he knew they'd been fooled. The Inspector is a conscience to the Birling family because he knows what they have done to cause the death of Eva Smith/Daisy Renton. ' A conscience is ones conduct together with the urge to prefer right over wrong'. Your conscience should be honest and not be hiding the truth or if you're hiding something or have committed a crime you therefore have a conscience. Your conscience can sometimes make you stressed and mentally distressed and cause you too crack up and do something like committing suicide. In conclusion my opinion is that the Inspector is important in getting Priestley's point of view across because, the play was published shortly after the war and Priestley would have wanted to express his feelings about violence and the cruel act of killing innocent people. He would also want to prevent any further conflicts and teach people the right way in life is not fighting to get what you want. The morale to this story is that everyone should be treated equally and fairly no matter whom you are and whatever circumstances they are living under. Priestley's play shows the rich (the Birlings) people taking responsibility for the girls death this makes them think that actions and doings towards other people can affect them in the long run making them, realises that no one should have to be treated any different because of their social 'position' to society. ?? ?? ?? ?? 1 ...read more.