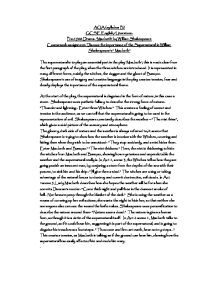 Discuss the importance of the Supernatural in William Shakespeare's

AQA (syllabus B) GCSE English/Literature: Pre-1900 Drama- 'Macbeth' by William Shakespeare Coursework assignment: Discuss the importance of the Supernatural in William Shakespeare's" Macbeth" The supernatural is to play an essential part in the play 'Macbeth'; this is made clear from the first paragraph of the play, when the three witches are introduced. It is represented in many different forms, mainly: the witches, the dagger and the ghost of Banquo. Shakespeare's use of imagery and creative language in the play creates tension, fear and clearly displays the importance of the supernatural theme. At the start of the play, the supernatural is disguised in the form of nature, in this case a storm. Shakespeare uses pathetic fallacy to describe the strong force of nature- "Thunder and lightning - Enter three Witches." This creates a feeling of unrest and tension in the audience, as we can tell that the supernatural is going to be used in the representation of evil. Shakespeare constantly describes the weather - "The mist thins", which gives a vivid picture of the scenery and atmosphere. The gloomy, dark side of nature and the weather is always referred to; it seems that Shakespeare is trying to show how the weather is in union with the Witches, covering and hiding them when they wish to be unnoticed- "They stop suddenly, and a mist hides them. Enter Macbeth and Banquo." "The mist thickens." Here, the mist is thickening to hide the witches from Macbeth and Banquo, showing how mysterious and unpredictable the weather and the supernatural really is. In Act 1, scene 3, the Witches tell us how they are going punish an innocent man, by conjuring a storm from the depths of the sea with their powers, to sink him and his ship- "I'll give thee a wind." The witches are using or taking advantage of the natural forces to destroy and commit destructive, evil deeds. ...read more.

He calls the witches "the devils" and tries to tell Macbeth not to trust the witches as they can be manipulating and can betray people-"but 'tis strange: and oftentimes to win us to our harm, the instruments of darkness tell us truths, win us with deep honest trifles, to betray us in deepest consequence." Banquo realises the harm they can do from the start, and it is ironic that he should be the one to die in the end. He notices how Macbeth seems different all of a sudden after he has been told his future predicaments by the witches- "Look how our partner's rapt." This shows how the predicament for Banquo about his son, has not affected him in the same way it has affected Macbeth; this is possibly because Banquo is stronger- minded than Macbeth. In Act 2 scene 4, the Old Man is talking with Ross. They comment on the general unrest of the day, which is "strangely dark"- "Dark night strangles the travelling lamp: is't night's predominance, or the day's shame, that darkness does the face of earth entomb, when living light should kiss it?" They say how strange it is for it to have become so dark so quickly during the day. Ross comments on the strange behaviour of King Duncan's horses- " Turned wild in nature, broke their stalls, flung out, contending against obedience, as they would make war with mankind." The horses of King Duncan are acting savagely and aggressively, which seems a prediction of the violence that is to occur later when Banquo is murdered the same night. AQA (syllabus B) GCSE English/Literature: Pre-1900 Drama- 'Macbeth' by William Shakespeare Coursework assignment: Discuss the importance of the Supernatural in William Shakespeare's Macbeth The witches first enter at the beginning of the play, where they are introduced with thunder and lightening to create an eerie atmosphere. The Elizabethan audience would have loved to see the witches, who represented evil, plotting against Macbeth. ...read more.

The witches provide Macbeth with the means of seeing his future before him, from within their cauldron. By showing him the apparitions of the future, they confuse Macbeth; he is self-conscious and paranoid about everyone around him. This concludes how central their role in the destruction of Macbeth is. AQA (syllabus B) GCSE English/Literature: Pre-1900 Drama- 'Macbeth' by William Shakespeare Coursework assignment: Discuss the importance of the Supernatural in William Shakespeare's Macbeth In the same way, Lady Macbeth is lured by their powers- she asks the supernatural to help her strengthen and resolve, in order to follow the path of evil. She uses this influence to goad Macbeth into action, when he seems to weaken- "When you durst do it, then you were a man." She is questioning his masculinity, saying that only when he murders king Duncan, he will be a man. The dagger lures Macbeth towards the evil path, ensuring that he will not weaken, by showing him the means to the end he seeks. It is the means by which he can achieve his goal of becoming king. The ghost of Banquo shows Macbeth and the audience that there are always consequences, often unforeseen, for wicked actions and that one never rests easily after obtaining power through evil means. Banquo's ghost highlights Macbeth's hypocrisy, when he tries to deceive the others at the banquet, at drinking a toast to his friend Banqo, making him realise that he cannot easily hide behind pretence. All these forms of the supernatural help to play a huge roll in the destruction of Macbeth, and without the supernatural, the play would not be as interesting and exciting, and also would not end with the same disastrous consequences. The supernatural causes Macbeth to betray his king, as well as becoming a traitor to his own country, which he certainly would not have done if he were his own self. The supernatural therefore shapes the events of the play; while the narrative gives the audience and readers insight into the central characters, and makes them feel emotionally involved in the story. ...read more.