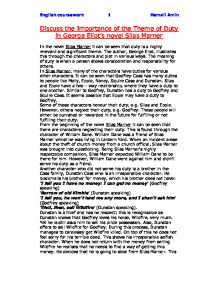 Discuss the Importance of the Theme of Duty in George Eliot's novel Silas Marner In the novel Silas Marner it can be seen that duty is a highly relevant and significant theme. The author, George Eliot, illustrates this through the characters and plot in various ways. The meaning of duty is when a person shows consideration and responsibility for others. In Silas Marner, many of the characters have duties for various other characters. It can be seen that Godfrey Cass has many duties to people like Molly, Eppie, Nancy, Squire Cass and Dunstan. Silas and Eppie have a two - way relationship, where they have a duty to one another. Similar to Godfrey, Dunstan has a duty to Godfrey and Squire Cass. It seems possible that Eppie may have a duty to Godfrey. Some of these characters honour their duty, e.g. Silas and Eppie. However, others neglect their duty, e.g. Godfrey. These people will either be punished or rewarded in the future for fulfilling or not fulfilling their duty. From the beginning of the novel Silas Marner it can be seen that there are characters neglecting their duty. This is found through the character of William Dane. William Dane was a friend of Silas Marner whilst he was living in Lantern Yard. When an incident arose about the theft of church money from a church official, Silas Marner was brought into questioning. ...read more.

After marrying Molly, he obviously had to take care of her and provide her with the things she needed. When Molly and Godfrey had their child, Godfrey did not help to take care of the child. He would pay visits occasionally to give Molly money. However, he did not take any responsibility towards the child. This shows how Godfrey did not show any responsibility towards his daughter and wife. However, Godfrey did show some sort of responsibility towards his second wife, Nancy. He did this by doing the opposite of what he did to Molly, as he provided for her and cared for her. When he was with Nancy he neglected his duty for his daughter, Eppie. He did this as he was scared of losing his wife. It is wrong of Godfrey to keep something like this from his wife, especially after finding out that Nancy would have accepted the baby and would do as much for it as a mother: 'And - O, Godfrey - if we'd had her from the first, if you'd taken to her as you ought, she'd have loved me for her mother - and you'd have been happier with me: I could have bore my little baby dying, and our life might have been more like what we used to think it 'ud be.' ...read more.

Silas and Eppie are two of the main characters who have served their duty. Therefore, they have ended up sharing joy happily ever after just like a fairytale. Silas has also received happiness by being accepted by the local community after fifteen years. At first he was thought to have the devil inside him. Nevertheless as time went by the villagers began to accept him. The fairytale theme is ended when Nancy's character comes in. This is because she is one of the characters who has served her duty but has been punished. This is not really her fault, but it can be considered to be Godfrey's fault. In conclusion, it can be said that duty is a highly relevant theme in the novel Silas Marner. After presenting all the characters and exploring whether they have served their duty or not, it can be seen that those who honour their duty are rewarded and those who neglect their duty are punished. It is also recognisable that Eliot has wished to show the theme of duty and its significance right from the beginning of the novel. It is also right to say that the novel is like a fable. This is because the characters that fulfil their duty are rewarded and those who do not fulfil their duty are punished. However, using Nancy's character we can see that not everyone gets what they deserve, as Nancy served her duty yet she was punished. ?? ?? ?? ?? English coursework 1 Hemali Amin ...read more.