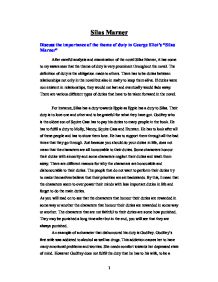 Discuss the importance of the theme of duty in George Eliot's

Silas Marner Discuss the importance of the theme of duty in George Eliot's "Silas Marner" After careful analysis and examination of the novel Silas Marner, it has come to my awareness that the theme of duty is very prominent throughout the novel. The definition of duty is the obligation made to others. There has to be duties between relationships not only in the novel but also in realty to keep them alive. If duties were non existent in relationships, they would not last and eventually would fade away. There are various different types of duties that have to be taken forward in the novel. For instance, Silas has a duty towards Eppie as Eppie has a duty to Silas. Their duty is to love one and other and to be grateful for what they have got. Godfrey who is the oldest son of Squire Cass has to pay his duties to many people in the book. He has to fulfil a duty to Molly, Nancy, Squire Cass and Dunstan. He has to look after all of these people and has to show them love. He has to support them through all the bad times that they go through. Just because you should do your duties in life, does not mean that the characters are all honourable to their duties. Some characters honour their duties with sincerity and some characters neglect their duties and wash them away. ...read more.

There is a character that Godfrey likes to help out in collecting in rent. This character is his father, Squire Cass. Although he collects the money for his father, he still lets his irresponsible, gambling brother borrow some money. He knows that this is not a good thing, yet he still lets his brother use up the money on useless things. Trust is an important obligation to have in a relationship with others. By marrying Molly, Godfrey lost the faith that his father had for him. The reason he had to get married to Molly was that he had a child with her. On the other hand there was one character that satisfied the theme of duty. The name of this character is Silas Marner. He is honourable to all those that he has to pay duties to, especially Eppie. Eppie entered Silas' life when he was vulnerable. He had just lost something that he believed to be his most valuable possession, his money. So, when he laid his eyes on Eppie he felt warmth within, which he had never felt in his life. "It seemed as if there were gold on the floor in front of the hearth." He took Eppie in as his own child and cared for her. He fulfilled all of his duties and obligations to her. He cared for her and disciplined her for her own good. ...read more.

Even when Silas finds Eppie, Dolly is beside him, aiding him to bring her up and she helps to feed Eppie. She brings Aaron's old clothes for Eppie, knowing that Silas could not afford to buy any clothes. This is another example of Dolly taking her life's duties seriously. Dolly is not only just supportive to Silas financially, but emotionally too. When she sees that Silas is feeling left out because he was not bonding with Eppie, as he wanted to, Dolly tells Silas that Eppie' love for him is far more than it is for her. This makes Silas feel better. Dolly in my opinion is a role model. I say this as she is one character that has shown in the novel that it is possible to do all of our duties. One does not always have to neglect their duties. I think that it is fairly obvious and evident that the theme of duty plays a very prominent role in the novel. It is also clear that the people with money, power or strength are not the people that achieve happiness in the end. It is the people that take their obligations to others seriously. It is also clear that the people that are neglecting their duties are getting punished, whether the punishment comes a week or even years later. Ironically the people that honoured their duties were rewarded in the end. This moral is not only relevant in the novel but in reality too. 2 ...read more.