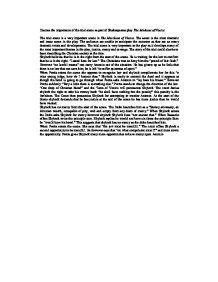 Discuss the importance of the trial scene as part of Shakespeares play The Merhant of Venice The trial scene is a very important scene in The Merchant of Venice. The secen is the most dramatic and tense scene in the play. The audience are unable to anticipate the outcome as ther are so many dramatic twists and developments. The trial scene is very important to the play as it develops many of the most important themes in the play, justice, mercy and revenge. The story of the trial could also have been describing the Christian society at the time. ...read more.

When Portia enters the scene she appears to recognise law and shylock compliments her for this "o wise young judge, how do I honour thee." Shylock is ready to commit the deed and it appears as though the bond is going to go through when Portia asks Antonio to "lay bare his breast." However Portia suddenly "Tary a little there is something else." Portia stands to change the direction of the law. "One drop of Christian blood" and the "laws of Venice will procescute Shylock. The court denies shylock the right to take his money back "he shall have nothing but the penalty" this penalty is the forfeiture. ...read more.

The Duke describes him as a "Stoney adversary, an inhuman wretch, uncapable of pity, void and empty from any dram of mercy." When Shylock enters the Duke asks Shylock for mercy however shylock Shylock does "not answer that." When Bassanio offers Shylock twice the principle sum. Shylock replies he would not have six times the principle Sum he "would have his bond." This suggests that shylock has no mercy as the duke described him. When Portia enters the scene. She says that "the jew must be merciful." The court offers Shylock a second opportunity to be merciful. He however says that "on what compulsion must I?" and turns down the opportunity. Portia gives Shylock many more opportunities to have mercy upon Antonio ...read more.