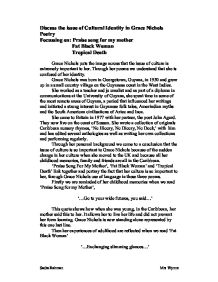 Discuss the issue of Cultural Identity in Grace Nichols Poetry.

Discuss the issue of Cultural Identity in Grace Nichols Poetry Focussing on: Praise song for my mother Fat Black Woman Tropical Death Grace Nichols puts the image across that the issue of culture is extremely important to her. Through her poems we understand that she is confused of her identity. Grace Nichols was born in Georgetown, Guyana, in 1950 and grew up in a small country village on the Guyanese coast in the West Indies. She worked as a teacher and journalist and as part of a diploma in communications at the University of Guyana, she spent time in some of the most remote areas of Guyana, a period that influenced her writings and initiated a strong interest in Guyanese folk tales, Amerindian myths and the South American civilisations of Aztec and Inca. She came to Britain in 1977 with her partner, the poet John Agard. They now live on the coast of Sussex. She wrote a collection of originals Caribbean nursery rhymes, 'No Hicory, No Dicory, No Dock,' with him and has edited several anthologies as well as writing her own collections and performing regularly. ...read more.

In 'Fat Black Woman', when it comes to the middle of the poem Grace Nichols uses alliteration of positive imagery, '...Bright and billowing...' Alliteration adds lift and warmth to the poem and makes you smile. Both these quotes from 'Fat Black Woman' give us a quicker rhythm and an image of a warm, free and colourful place. Before we even read the poem 'Tropical Death' we instantly know that this poem is colourful as the title gives it away. We get a very positive image from the use of colour in 'Tropical Death', '...Brilliant tropical...' The idea and image of Caribbean funerals is put across as people celebrating and lots of colour. 'Praise Song for my Mother' is full of positive imagery also, '...Water to me...' This is a visual image of water and life and instantly reminds us of the colour blue and we think of Caribbean straight away because of the blue seas. 'Praise Song for my Mother', the fourth stanza is a snapshot of smells, images and colour of youth and her memory of her mother- '...You were The fish's red gill to me The flame trees spread to me The crab's leg The fried plantain smell Replenishing replenishing...' ...read more.

She also brings out her feelings through the structure of the poems. She uses short sentences to create a more mocking effect. In 'Fat Black Woman' she uses a short sentence at the end without any punctuation, '...Nothing much beyond size 14...' This allows readers to read at their own pace and also shows her annoyance as she ends the poem on a negative note. The structure of 'Tropical Death' is straightforward although in the fourth stanza she uses repetition '...First night Third night Nine night...' Repetition imitates heartbeat or drum beat, she has a desire to return to her African roots. The layout of the third poem 'Praise Song for my Mother' resembles her childhood four simple stanzas all begin with ' you were' this simple repetition is to represent her childhood. It is made clear that Grace Nichols is constantly in search for a sense of cultural identity through her poetry as she uses ambiguity and constant comparison of the UK and Caribbean to make the Caribbean lifestyle sound much more attractive, this is why I have come to a conclusion that she feels more comfortable in the Caribbean, this is made clear through her poetry as she is always giving us negative imagery of the UK and positive of the Caribbean. Sadia Rahman Mrs Wynne ...read more.