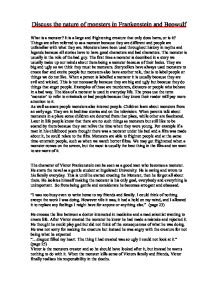 Discuss the nature of monsters in Frankenstein and Beowulf.

Discuss the nature of monsters in Frankenstein and Beowulf What is a monster? It is a large and frightening creature that only does harm, or is it? Things are often referred to as a monster because they are different and people are unfamiliar with what they are. Monsters have been used throughout history in myths and legends because all stories have to have good characters and bad characters. The monster is usually in the role of the bad guy. The first time a monster is described in a story we usually make up our minds about them being a monster because of their looks. They are big and ugly so we think they must be monsters. Storytellers have always used monsters to create fear and excite people but monsters also have another role, that is to label people or things we do not like. When a person is labelled a monster it is usually because they are evil and wicked. This is not necessarily because they are big and ugly but because they do things that anger people. Examples of these are murderers, dictators or people who behave in a bad way. The idea of a monster is used in everyday life. The press use the term 'monster' to refer to criminals or bad people because they know their reader will pay more attention to it. As well as scare people monsters also interest people. Children learn about monsters from an early age. ...read more.

(page 46) The monster may look ugly, "veins showing through his yellow skin, horrid dull eyes and thin black lips" but he is misunderstood because he is actually sensitive. People become scared of him because he looks like a monster but in fact he is more human than a lot of the other characters in the book. At times I feel sorry for the creature because he knows he will never fit in because of his looks. "All humans hate ugly things and so, since I am the ugliest creature on this earth, I am the most hated too." (page 45) The creatures reactions to the de Lacey family prove he is not a monster. He watches them, learns from them and wishes he was part of a family like them. He even feels guilty about stealing food from them and helps them by secretly doing jobs for them, such as chopping wood. These are not the sort of things monsters do. He also saves a girl from drowning so that shows that he is not created bad and his surroundings cause him to become evil. "I had feelings of kindness and love, and they were repaid with anger and hatred." (p 94) It is very sad when the creature tries to make friends with the family but is rejected because of his appearance. Now the creature has no other choice but to take revenge on people as they will not accept him as a ordinary person. ...read more.

Hitler's ideas were as bad as all the killings he was responsible for so he should be called a monster. The Loch Ness monster is an example of a non-human creature that has been labelled a monster. When it has been seen it is usually described as having a long neck and a large body a bit like a dinosaur. It is not like any other animals humans know about. A tiger is not called a monster because a lot is known about them. You can see them in a zoo and everybody knows what one looks like. The loch Ness monster is different. It is rarely seen and when it is it's by one or two people when it is misty and foggy. It is an example of something that does not exist but when people see something they can't explain they think it must be a monster. It's looks might be like a monsters but it has not attacked people or boats so it does not seem evil or wicked. Scientists have tried to find it many times but they never do. The Loch Ness monster is now used as a tourist attraction. People go to Loch Ness thinking they might see the monster but they never do. The monster is now on t shirts and souvenirs and this shows that while some people are scared of monsters they are also fascinated by them. I think it is fair to call the Loch Ness monster a monster but not because it is evil or wicked but because it is a mystery that interests people. ...read more.