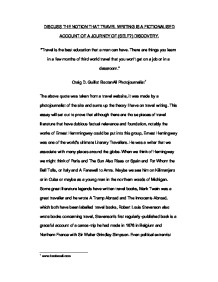 Discuss the Notion That Travel Writing Is a Fictionalised Accountof a Journey of (Self?) Discovery.

DISCUSS THE NOTION THAT TRAVEL WRITING IS A FICTIONALISED ACCOUNT OF A JOURNEY OF (SELF?) DISCOVERY. "Travel is the best education that a man can have. There are things you learn in a few months of third world travel that you won't get on a job or in a classroom." Craig D. Guillot BootsnAll Photojournalist1 The above quote was taken from a travel website, it was made by a photojournalist of the site and sums up the theory I have on travel writing. This essay will set out to prove that although there are those pieces of travel literature that have dubious factual relevance and foundation, notably the works of Ernest Hemmingway could be put into this group, Ernest Hemingway was one of the world's ultimate Literary Travellers. He was a writer that we associate with many places around the globe. When we think of Hemingway we might think of Paris and The Sun Also Rises or Spain and For Whom the Bell Tolls, or Italy and A Farewell to Arms. Maybe we see him on Kilimanjaro or in Cuba or maybe as a young man in the northern woods of Michigan. Some great literature legends have written travel books, Mark Twain was a great traveller and he wrote A Tramp Abroad and The Innocents Abroad, which both have been labelled travel books, Robert Louis Stevenson also wrote books concerning travel, Stevenson's first regularly-published book is a graceful account of a canoe-trip he had made in 1876 in Belgium and Northern France with Sir Walter Grindlay Simpson. ...read more.

his fans to comment: "I want to congratulate you on the kind of books that make me laugh in public or private and the kind that I have not found before."2 "Like your stuff, it has a real warmth to it & makes me want to visit places I've never had the slightest interest in."3 "Without you, literature would have a gaping hole. Thank you."4 Pretty strong praises I'm sure you'd agree Bryson himself accredits his success to the ability to tell events in an old-fashioned story telling way. "It's just like when you hear a great story in a bar, an anecdote that you want to rush right home and relate to other people. You want to spread the word."5 Throughout Bryson's books the reader is transported into the work of the Appalachian Trail, looking out from the mountaintops at the surrounding countryside. That's what you appreciate, similarly the reader can also to Bryson's account and remember something that they have done - admittedly it might not be an exact true memory that you are able to share with Bryson's - but I for one can relate to my own friends that become like Stephen Katz in A Walk In The Woods, we've all stayed in dodgy B & B's as in Notes From A Small Island, and even though not everyone has eaten in a Bowling Alley restaurant - we've all had to deal with nightmare waitresses. ...read more.

It's very interesting to read about places that the reader is usually unlikely ever to go, or circumstances under which they're unlikely to see them. The challenge is to write descriptive passages in a fresh way. Too often they sound like something you'd write on a postcard: "Mum, it's breathtaking. It was stupendous." Paul Theroux manages to describe a landscape in a very original and novel way. The work of a travel writer is not supposed to be treated as gospel, their personal memories and accounts of places and people they have seen written in novel form much later after returning. They are not supposed to be treated as travel guides more a travel companion, a piece of literature that encapsulates the author self discovering journey through life's many highways and allows us as the audience to commence our own journey of self discovery, be it by undertaking our own journey or simply by sitting at home, work or in a caf� reading someone's accounts of travel. Everyone in the world has done travel writing after a fashion, because everyone who has gone on vacation has written somebody a letter or a postcard. And most of those phrases that spring to mind have been used. It's very hard to describe something that's particularly beautiful or majestic or whatever in a way that's fresh and original. To read different writers can often mean transportation to a different place, supposedly the same. If we really want to experience the place, we must get up and go there ourselves. ...read more.