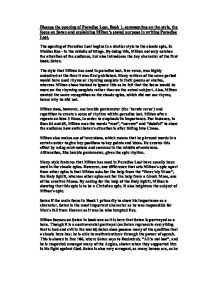 Discuss the opening of Paradise Lost, Book 1, commenting on the style, the focus on Satan and explaining Milton(TM)s stated purpose in writing Paradise Lost.

Discuss the opening of Paradise Lost, Book 1, commenting on the style, the focus on Satan and explaining Milton's stated purpose in writing Paradise Lost. The opening of Paradise Lost begins in a similar style to the classic epic, In Medias Res - in the middle of things. By doing this, Milton not only catches the attention of the audience, but also introduces the key character of the first book, Satan. The style that Milton has used in paradise lost, free verse, was highly undesired at the time it was first published. Many writers of the same period would have used rhyme or rhyming couplets in their poems or stories, whereas Milton chose instead to ignore this as he felt that the focus would be more on the rhyming couplets rather than on the actual subject. ...read more.

However, one difference that sets Milton's epic apart from other epics is that Milton asks for the help from the "Heav'nly Muse", the Holy Spirit, whereas other epics ask for the help from a Greek Muse, one of the creative Muses. By asking for the help of the Holy Spirit, Milton is showing that this epic is to be a Christian epic. It also heightens the subject of Milton's epic. Satan if the main focus in Book 1 primarily to show his importance as a character. Satan is the most important character as he was responsible for Man's fall from Heaven as it was he who tempted Eve. Milton focuses on Satan in book one as it is here that Satan is portrayed as a hero. ...read more.

Milton wrote paradise lost as he felt that it was his aim or purpose to justify the ways of God to Man, which was why he had previously studied to become a Priest before writing paradise lost. Milton tells the audience the reason why he created paradise lost in the exordium, which is the summary of content and is a typical feature of classic epics, such as the Odyssey and in plays by Shakespeare. He also wanted to write a Christian epic in English as he felt that the English language was important enough to be known all over the world, and in order to do that, there would have to be a great English epic. So, Milton wrote an epic about the biggest and most important subjects: Heaven, Hell, God, Satan, Man and His fall from paradise, and initially, the beginning of thime to the Last Judgement. ...read more.