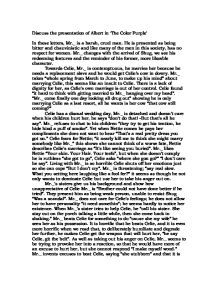 Discuss the presentation of Albert in 'The Color Purple' In these letters, Mr._ is a harsh, cruel man. He is presented as being bitter and chauvinistic and like many of the men in this society, has no respect for women. Mr._ changes with the arrival of Shug, we see his redeeming features and the reminder of his former, more likeable character. Towards Celie, Mr._ is contemptuous, he marries her because he needs a replacement slave and he would get Celie's cow in dowry. Mr._ takes "whole spring from March to June, to make up his mind" about marrying Celie, this seems like an insult to Celie. There is a lack of dignity for her, as Celie's own marriage is out of her control. Celie found "it hard to think with gitting married to Mr._ hanging over my head". "Mr._ come finally one day looking all drug out" showing he is only marrying Celie as a last resort, all he wants is her cow "that cow still coming?" Celie has a dismal wedding day, Mr._ is detached and doesn't care when his children hurt her, he says "don't do that! -But that's all he say". Mr._ refuses to chat to his children "they try to get his tention, he hide hind a puff of smoke". Yet when Nettie comes he pays her compliments she does not want to hear "That's a real pretty dress you got on." ...read more.

At this point in the book, the reader's opinion of Mr._ could not be any worse. Mr._ is a coward, when the preacher "got his mouth on Shug Avery" and is criticizing her "Mr._ don't say nothing...he gaze out the window." Later, he rescues Shug, who brings out his emotional side; "Nobody fight for Shug he say. And a little water come to his eyes." We have empathy with Mr._ now; his love for Shug makes him slightly likeable as a character. We know there is no communication in Mr._ and Celie's marriage as, through lack of use, she doesn't even remember his first name; "who Albert, I wonder. Then I remember Albert Mr._ first name." This character's name change seems to make him more endearing, more human. Shug makes Albert bearable but Celie does not dare to call him 'Albert' yet. Albert loves Shug so much he stops smoking for her "Mr._ don't smoke. Don't drink. Don't even hardly eat." When Shug is ill Albert watches her "every breath" showing how adoring and worried he is. Shug exposes Albert quirks "they have made three babies together but he squeamish bout giving her a bath." Albert finally says something nice to Celie "Mr._ asks me how I git her to eat" "I bin scared, he say. Scared." We find Albert's weaknesses now "he cover up his eyes with his hands", and it seems as though he wants to hide his vulnerability from Celie. ...read more.

Albert in hiding the letters is acting solely out of malice; he still holds a grudge against Nettie because she wouldn't do what he wanted. Celie's disbelief, that Albert "been keeping your letters", is touching, after all Albert has done to her she says "Naw...Mr._ mean sometimes, but he not that mean." This is a massive betrayal of Celie and shows Albert's power over her, that he can stop her receiving her sister's letters. Nettie never doubts Celie's faithfulness, she knows Celie isn't writing back because of Albert "you probably won't get this letter...I'm sure Albert is still the only one to take mail out of the box". Shug has Albert under her control, she can get find out anything about him and knows he is spiteful enough to hide Nettie's letters "he that mean". Shug stops loving him the moment she finds out he beats Celie, we respect Shug more for this. We have no justification for Mr._'s behaviour towards Celie, except for his love of Shug and the society, which has indoctrinated him. Later when Mr._ becomes wiser he starts to see Celie as a human being, listens to her, and explains his reasons for treating her so badly. Until this happens, she does not forgive him and neither does the reader. All we see presented is a barbaric, angry man who has through his own fault lost the lady he loves. ...read more.