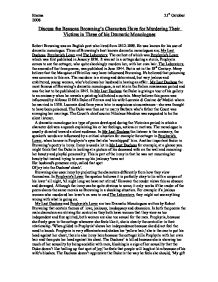 Discuss the Reasons Browning's Characters Have for Murdering Their Victims in Three of his Dramatic Monologues Robert Browning was an English poet who lived from 1812-1889. He was known for his use of dramatic monologue. Three of Browning's best known dramatic monologues are; My Last Duchess, Porphyria's Lover and The Laboratory. The earliest of which was Porphyria's Lover which was first published in January 1836. It was set in a cottage during a storm, Prophyria comes to see the cottager, who quite shockingly murders her, with her own hair. The Laboratory, the second of the three poems, was published in June 1844. But is set in the 18th Century. Many believe that the Marquise of Brivilles may have influenced Browning. It's believed that poisoning was common in this era. The murderer is a strong and determined, but very jealous and embittered, young woman, who's believes her husband is having an affair. My Last Duchess the most famous of Browning's dramatic monologues, is set late in the Italian renaissance period and was the last to be published in 1845. In My Last Duchess the Duke is giving a tour of his gallery to an emissary when he reveals a painting hid behind a curtain. Many believe this poem was influenced by Alfonso II fifth Duke of Ferrara and his wife Lucrezia di Cosimo de'Medici whom he married in 1558. Lucrezia died three years later in suspicious circumstances - she was thought to have been poisoned. ...read more.

Throughout the poem it appears that the Duke is talking about his wife, though really everything he says relates back to him in a certain way. This is very egotistical and slightly narcissistic. 'She had a heart - how shall I say', here the Duke is talking about his wife's personality but still manages to relate to himself. The Duke believes that he is powerful, of a higher status than his wife and in control. However the reader sees his arrogance and his unconfident speech which makes him seem insecure. The irony is that although the reader can see this weak side to the Duke, he himself cannot see it, and has put himself on a pedestal. The language used by the Duke reveals a lot about his character. We can tell how egotistical the Duke is by looking at how many times he says 'I' during the course of the poem. The Duke speaks in rhyming couplets which suggests he is very high class and prides himself by using language intelligently. The Duke sometimes hesitates during his speech which reflects normal speech patterns. 'Somehow - I know not how - as if she ranked'. However Browning doesn't use normal poetic devices such as alliteration in his speech, inferring that the Duke isn't really trying to sound poetic or really smart because he feels like the emissary is below him. Overall the Duke murders his wife because she doesn't fit his ideal. ...read more.

Two names are mentioned; Pauline and Elise. This is a slight change of story from previously where she said that she caught two of them together, this shows her delusion as she isn't even certain who she wants to poison. This also shows how naive she is. The woman wants to kill Pauline and Elise because they are love rivals, this is so important to her because if she and her husband were to divorce she would probably lose all her possessions and money. It would also be very difficult for her to marry again as men didn't want a divorced woman as a wife. I think Browning wrote My Last Duchess and Porphyria's Lover because he wanted to show how women were looked down on, and criticise Victorian views on women. Browning wrote The Laboratory to show how strong minded women could be. All the poems show people will do mad things when love comes calling. Browning is saying that in human nature people will strive to get what they want. Browning used dramatic monologue to so there is irony as we can see the characters deluding themselves. Browning also uses dramatic monologue because a character revelation is much more effective than an action being described by an onlooker. Robert Browning made his poems shocking to exaggerate the fragile mental state that his characters are in, and to make his poems more dramatic. ?? ?? ?? ?? Emma 21st October 2008 ...read more.