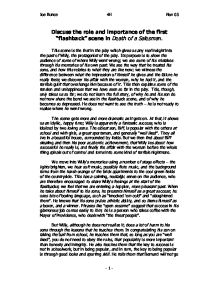 Discuss the role and importance of the first &quot;flashback&quot; scene in Death of a Salesman.

Discuss the role and importance of the first "flashback" scene in Death of a Salesman. This scene is the first in the play which gives us any real insight into the past of Willy, the protagonist of the play. Its purpose is to show the audience of some of where Willy went wrong; we see some of his mistakes through his memories of his own past. We see the way that he treated his sons, and how this relates to what they are like now; we witness the difference between what the impression of himself he gives and the failure he really feels; we discover his affair with the woman, why he had it, and the terrible guilt that overhangs him because of it. This then explains some of the tension and unhappiness that we have seen so far in the play. This, though, only takes us so far; we do not learn the full story, of why he and his son do not now share the bond we see in the flashback scene, and of why he becomes so depressed. He does not want to see the truth - he is not ready to realise where he went wrong. The scene gets more and more dramatic as it gets on. ...read more.

He tells them that Bernard will not go far, because, although he is good academically, he is not well liked, but Biff, being as popular as he is, will become a success. Bernard is "anaemic" and a "pest", whilst he is clearly proud of his own son, Biff. This, of course, is unrealistic - Bernard's hard working attitude is more likely to render him a success than Biff's sport aptitude and looks, and we see this in the play. In the next episode, with Linda, what he tells her contrasts greatly with the story he told his two sons. This does not happen immediately though; firstly he tells her he "was sellin' thousands and thousands"; then he says he sold "five hundred gross in Providence and seven hundred gross in Boston", before revealing that he actually sold "roughly two hundred gross on the whole trip". When he is talking to his sons, he is trying to gain their love and respect, but he knows that he already has Linda's, and so does not try to impress her. After claiming to his sons that he is "well liked", he reveals to Linda that the other sellers laugh at him behind his back, and refer to him as "walrus". He greatly exaggerates his successes; his earlier claims of easy access to wealth contrasts with his resignation that he has to be "at it, ten, twelve hours a day". ...read more.

Both Linda and Bernard become very out of character, seemingly unceasingly listing problems with his son Biff, despite his cries of "Shut up!" and "Get outa here!". He is dramatically trying to shut out the memories, to prevent him from coming to the realization that Biff was not perfect, and a lot of it was his fault. Willy is in between Bernard and Linda with a verbal onslaught of complaints about Biff. This peaks with an explosion of anger, with Willy telling himself that Biff was not a failure, comparing his son with Bernard. He finally just denies it - "I never in my life told him anything but decent things". This scene is not, by any means, simply a memory. Its purpose is to provide us with an insight into the workings of Willy's mind. It helps us begin to understand how Willy got into the mental state that we have seen in the play. As we have seen, the use of staging, language and structure have all been important for us to begin our understanding. But Willy does not completely confront the whole truth about his son, but he shuns it, leaving us wondering when he will inevitably confront his past mistakes, and how he will react. Joe Bunce 4H Nov 05 - 1 - ...read more.

This essay engages well with the question, looking at the significance of this scene. There is a focus on the audience response here, which is made clear from the introduction. Techniques are addressed, rather than simply looking at the plot, ...

This essay engages well with the question, looking at the significance of this scene. There is a focus on the audience response here, which is made clear from the introduction. Techniques are addressed, rather than simply looking at the plot, but I feel more analysis would be beneficial here. When writing the essay chronologically through the scene, you are already susceptible to retell the story rather than pick a collection of techniques used throughout. Yes you should comment on structure when analysing, but try and not use this style as it's not sophisticated.

The analysis here is sound. There is a strong knowledge of the play, with numerous pieces of textual evidence being used. I would've liked to have seen more focus on language analysis and imagery. For example, the essay picks up on Willy exaggerating quite often, but there is no discussion of the effect this has to his characterisation and the audience's response to him. For an essay on a play, there isn't much awareness of stage presence. The essay comments on Bernard's description, but there is no discussion of how he may appear on stage. It is vital when doing an essay on drama that you show awareness of the significance of the context, and with this stage directions, music, etc. By doing so, your essays will definitely improve in terms of marks. It was quite surprising to see no mention of Arthur Miller in this essay. It is key that you discuss the characters as Miller's constructions, and why he chooses to do certain actions, as this then forces you to discuss the effects on the audience. It is a gross misunderstanding to write as if the characters are real and make their own decisions. I would also note that Miller himself doesn't call them flashbacks, but mobile concurrencies of past and present. If this was included in the essay, it would allow a discussion of how Willy is losing control over his own mind as the past and present merge.

I'm not a big fan of the style here. I personally don't write as if I am one of the audience when writing essays, as I don't feel it is sophisticated. For example "its purpose is to provide us" or "we move into WillyÃ¢â‚¬â„¢s memories". I would rephrase much of the essay as "Miller uses Willy's memories to provide the audience" or similar. It seems more more sophisticated if you are commenting, rather than posing yourself as one of the audience, and this is the step required to get the top marks at GCSE for style. The structure here is solid, with a clear introduction and conclusion allowing for a sustained argument. Paragraphs are sometimes well signposted, but often these are too long. This gives the examiner the impression of a wordy or repetitive style, whereas these should be concise and summarise succinctly the point. Spelling, punctuation and grammar are fine.