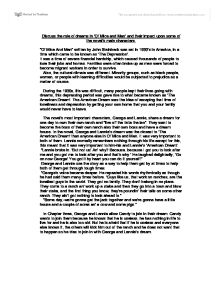 Discuss the role of dreams in Of Mice and Men and their impact upon some of the novels main characters.

Discuss the role of dreams in 'Of Mice and Men' and their impact upon some of the novel's main characters. "Of Mice And Men" written by John Steinbeck was set in 1930's in America, in a time which came to be known as 'The Depression'. It was a time of severe financial hardship, which caused thousands of people to lose their jobs and homes. Families were often broke up as men were forced to become migrant workers in order to survive. Also, the cultural climate was different. Minority groups, such as black people, women, or people with learning difficulties would be subjected to prejudice as a matter of course. During the 1930s, life was difficult, many people kept their lives going with dreams, this depressing period was gave rise to what became known as 'The American Dream'. The American Dream was the idea of escaping that time of loneliness and depression by getting your own home that you and your family would never have to leave. The novel's most important characters, George and Lennie, share a dream for one day to own their own ranch and "live off the fatta the lan". ...read more.

"Tell you what...'S'pose I went in with you guys. That's three hundred an' fifty bucks I'd put in. I ain't much good, but I could cook and tend the chickens and hoe the garden some. How'd that be?" "When they can me here, I wisht somebody'd shoot me. But they won't do nothing like that. I won't have no place to go, an I can't get no more jobs." While the ranch-hands never openly discuss their loneliness, Curley's wife spends most of her time in the novel searching for company. She always looks for Curley around the ranch when she already knows he's not there. "I'm tryin' to find Curley, Slim' 'Well, you ain't tryin very hard. I seen him goin' in your house." She is the only female there; therefore she has no one to talk to and not much company so she flirts with the other men to help her communicate with them which is the only thing she wants, someone to talk to and listen to her. Curley's wife thought that she would have everything to live for, after marrying Curley but which it turned out wrong, horribly wrong, she's with a man who doesn't even love her and spends a lot of his time without her, especially that all she needs is attention. ...read more.

'Sure, right now. I gotta, We gotta.' And George raised the gun and steadied it, and he brought the muzzle of it close to the back of Lennie's head." Curley's Wife also wanted to be famous, glamorous and to be wanted but she gets accidentally killed by Lennie so she also cannot achieve her dream, but in other words, she is also escaping from a miserable life with Curley. Candy is also in on the dream with George and Lennie, but when Lennie dies, Curley knows the dream is no more without him. "Now Candy spoke his greatest fear. 'You an' me can get the little place can't we, George? You an' me can go there an' live nice, can't we, George, can't we?' Before George answered, Candy dropped his head and looked down at the hay. He knew." John Steinbeck chose to have all the main characters' dreams come to nothing because that is what life is, especially the serious issues, such as: Women, Black people and People with learning difficulties. He wanted his book to be historically accurate, as well as an accurate portrayal of life itself. The story was mainly based on the name of the novel from 'To a mouse' by Robert Burns, the original lines of 'The best laid plans of mice and men gang aft agley.' ?? ?? ?? ?? ...read more.