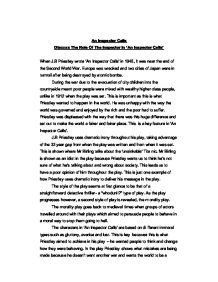 Discuss The Role Of The Inspector In An Inspector Calls

An Inspector Calls Discuss The Role Of The Inspector In 'An Inspector Calls' When J.B Priestley wrote 'An Inspector Calls' in 1945, It was near the end of the Second World War. Europe was wrecked and two cities of Japan were in turmoil after being destroyed by atomic bombs. During the war due to the evacuation of city children into the countryside meant poor people were mixed with wealthy higher class people, unlike in 1912 when the play was set. This is important as this is what Priestley wanted to happen in the world. He was unhappy with the way the world was governed and enjoyed by the rich and the poor had to suffer. Priestley was displeased with the way that there was this huge difference and set out to make the world a fairer and fairer place. This is a key feature in 'An Inspector Calls'. J.B Priestley uses dramatic irony throughout his play, taking advantage of the 33 year gap from when the play was written and from when it was set. This is shown where Mr Birling talks about the 'unsinkable' Titanic. Mr Birling is shown as an idiot in the play because Priestley wants us to think he's not sure of what he's talking about and wrong about society. This leads us to have a poor opinion of him throughout the play. This is just one example of how Priestley uses dramatic irony to deliver his message in the play. The style of the play seems at first glance to be that of a straightforward detective thriller- a "whodunit?" type of play. As the play progresses however, a second style of play is revealed, the morality play. The morality play goes back to medieval times when groups of actors travelled around with their plays which aimed to persuade people to behave in a moral way to stop them going to hell. ...read more.

Priestley does this so we are all absolutely sure that Birling is big headed and not a liked or good character. Mrs Birling has the power of being chairwoman of the Brumley Women's Charity. This means she can give help to women that are struggling such as if they are pregnant. She refuses Eva's case for no valid reason. "A lot of silly nonsense" and "First she called herself Mrs Birling". These show she doesn't give this desperate girl help because of here own pride. She also used her power to stop the other workers at the charity from giving her help. Another example of the misuse of power is from Eric and Gerald who both have sexual power. Both Eric and Gerald have sex with Eva and Eric made her pregnant. "She told me she was going to have a baby". Eric just sees Eva as an object, but Gerald loves her but he only really stays with Eva so he can get enjoyment from it "You were the wonderful Fairy Prince". Sheila has the power of her class and her family behind her and she uses it to sack Eva from the shop in which she was employed. "I went to the manager of Milwards and told him that if they didn't get rid of that girl, I'd never go near the place again and I'd persuade mother to close out account with them". In this case because of her own envy and anger she behaves like a spoilt brat and blackmails the shop so the girl gets sacked. Priestley continually uses this 'misuse of power' and the seven deadly sins, which each character represents such as Birling with greed a lot, because this was happening in the real world and therefore included this in his play. Because his play is a morality play, Priestley hoped to affect people who watched the play and change what was happening in the world from corruption to fairness and equality. ...read more.

'An Inspector Calls' is all about the attitudes and actions of people and how they affect others. The Inspector shows how wrong people are behaving which Priestley hoped would affect the audience and make them learn. Priestley and the Inspector both point out that Birling is wrong by using dramatic irony. Such as when Birling makes a long speech about how war is impossible "And to that I say - fiddlesticks!" Eric, the youngest doesn't agree - "Yes, I know - but still - ". Here the Capitalist is deliberately shown to be completely and obviously wrong when the young Eric is right. If Birling is wrong about this, then what else could he be wrong about? Now when he says "a man has to look after his own business and look after himself..." We suspect he is wrong. Now at the end Priestley uses the Inspector to show his view - "we are responsible for each other." Because of this, we believe this is the correct view and now we can see how Priestley manages to achieve his goal of having socialism in the world, in the play. In 'An Inspector Calls' the Inspector plays a number of major roles. He is used to create the excitement and tension in the play through his interrogation techniques. He also shows the misuse of power in the world and furthermore is used as a catalyst. He finally helps achieve Priestley's aims by putting his message that we should be a community in the play. He plays each one adeptly and manages to successfully keep the interests of the audience and make it a good play. He conveys Priestley's message well and is an example to everyone, in the play or audience. In my opinion the Inspector is key in the play and plays his roles successfully, because it reminds us all that we need to look after each other and share. Without him perhaps the world would still be the world of corruption in Priestley's and the plays time. ...read more.