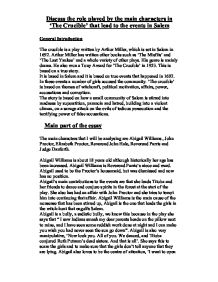 Discuss the role played by the main characters in &amp;#145;The Crucible&amp;#146; that lead to the events in Salem

Discuss the role played by the main characters in 'The Crucible' that lead to the events in Salem General Introduction The crucible is a play written by Arthur Miller, which is set in Salem in 1692. Arthur Miller has written other books such as 'The Misfits' and 'The Last Yankee' and a whole variety of other plays. His genre is mainly drama. He also won a Tony Award for 'The Crucible' in 1953. This is based on a true story. It is based in Salem and it is based on true events that happened in 1692. In these events a number of girls accused the community. 'The crucible' is based on themes of witchcraft, political motivation, affairs, power, accusations and corruption. The story is based on how a small community of Salem is stirred into madness by superstition, paranoia and hatred, building into a violent climax, on a savage attack on the evils of tedious persecution and the terrifying power of false accusations. Main part of the essay The main characters that I will be analysing are Abigail Williams, John Proctor, Elizabeth Proctor, Reverend John Hale, Reverend Parris and Judge Danforth. Abigail Williams is about 18 years old although historically her age has been increased. Abigail Williams is Reverend Parris's niece and ward. Abigail used to be the Proctor's housemaid, but was dismissed and now has no position. ...read more.

Another significant character is Elizabeth Proctor. Elizabeth is in her middle 30's and is the wife of John Proctor. She also is the mother of three sons. In the crucible Elizabeth gets suspicious of Abigail Williams and her husband. Also she asks John Proctor to tell the court about what Abigail Williams has told him about the night in the forest. Elizabeth is also a victim of an affair between John and Abigail. Elizabeth is a strong character, 'He have his goodness now. God forbid I take it away from him!' Elizabeth is being strong here by letting John Proctor die from his own free will. Elizabeth also gets suspicious during the play of John Proctor, 'I'll have your suspicion no more'. John says this to Elizabeth. Elizabeth is also a cold person, 'Oh Elizabeth your justice would freeze beer'. John says that she is an unforgiving cold person. Another character that plays an important role in the play is Judge Danforth. His age is about 60 years old. He is the lead Judge in the trials in Salem. Judge Danforth makes the decisions as to who should be executed for witchcraft and who should not. All along the play Danforth chooses to believe Abigail and Parris against Proctor and the others. Judge Danforth is wrapped up in his own little world and doing what he thinks is "right". ...read more.

John Proctor says this to Reverend Hale after Hale had questioned him about going to church. Parris is also an insecure character for example when is talking to Abigail, 'Now look you, child, your punishment will come in its time. But if you trafficked with spirits in the forest I must know it now, for surely my enemies will, and they will ruin me with it'. Parris is also a coward, ' Parris was voted from office, walked out on the highroad, and was never heard of again'. Conclusion I have concluded from the play that the play is about human lust and characters have their weaknesses- everybody has faults. By Abigail's lust for Proctor leads Proctor to death and suspicion for Elizabeth. In the end the truth comes out and for this John Proctor has to pay for it. Some people's faults are worse than others. This human weakness can lead to tragedy as you can see in the play. All the events flow naturally from one event to the next. This is caused by the natures of the characters. The fact that the story isn't contrived an even more that it is based on a true story is interesting. If there is one thing that I learned in the play is that faults are exploited by nearly all the characters. These faults contradict the future of several key characters. ...read more.