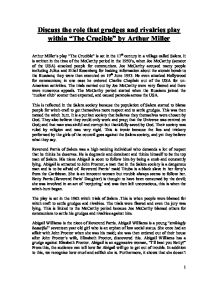 Discuss the role that grudges and rivalries play within "The Crucible" by Arthur Miller Arthur Miller's play "The Crucible" is set in the 17th century in a village called Salem. It is written in the time of the McCarthy period in the 1950's, when Joe McCarthy (senator of the USA) attacked people for communism. Joe McCarthy accused many people including Julius and Ethel Rosenberg for leaking information about the atomic bomb to the Russians; they were then executed on 19th June 1953. He even attacked Hollywood for communism; in one case he ordered Charlie Chaplain out of the USA for un-American activities. The trials carried out by Joe McCarthy were very flawed and there were numerous appeals. The McCarthy period started when the Russians joined the 'nuclear club' sooner than expected, and caused paranoia across the USA. This is reflected in the Salem society because the population of Salem started to blame people for witch-craft to get themselves more respect and to settle grudges. This was then named the witch hunt. It is a puritan society that believes they themselves were chosen by God. They also believe they could only work and pray; that the Universe was centred on God; and that man was sinful and corrupt but thankfully saved by God. Their society was ruled by religion and was very rigid. This is ironic because the lies and trickery performed by the girls of the council goes against the Salem society, and yet they believe what they say. Reverend Parris of Salem was a high-ranking individual who demands a lot of respect that he thinks he deserves. He is dogmatic and dominant and thinks himself to be the top man of Salem. His niece Abigail is soon to follow him by being a snob and constantly lying. Abigail is attracted to John Proctor, a man that in the Salem society is a dangerous man and is to be afraid of. ...read more.

Giles Correy has a grudge against Thomas Putnam, "If Jacob's hangs for a witch he forfeit up his property - that's law! And there is none but Putnam with the coin to buy so great a piece. This man is killing his neighbours for their land." From the quote the audience recognises that Giles Correy thinks wisely about the witch-craft hysteria. It also shows how Giles Correy is highly educated. Giles Correy shows that he knows why Thomas Putnam is accusing people for witch-craft to obtain more land. By use of the word "killing", Giles Correy emphasises how Thomas Putnam is using the witch-trials to gain land. In a sense, Giles Correy is also accusing Thomas Putnam for lying. Grudges and rivalries play a vital role in "The Crucible" by Arthur Miller because they provoke the key events in the play. The grudges and rivalries are held over mostly land, social status, and in some cases, love. These grudges were then resolved by blaming people to settle their grudges and rivalries- this is also known as the blame game. The play "The Crucible" is relevant to the time it was written in; this was the McCarthy period. This is because Joe McCarthy blamed people for communism in the USA to rise in social status. This sparked off paranoia across the USA which is exactly what happened in the Salem society. In the McCarthy period there were many cases that are mirrored in the Salem society, for instance the case were Pete Townshend was blamed for child pornography to destruct his music career with his band The Who. Thankfully Pete Townshend case was dismissed; he then went onto creating another album with his band after a twenty four year gap. Another case is the Charlie Chaplain case, this was when Charlie Chaplain was tried for un-American activities and was ordered out of the USA. In conclusion, Arthur Miller used "The Crucible" as an act to show how the USA mirrored the events that happened in the 17th century Salem society. ?? ?? ?? ?? 1 ...read more.