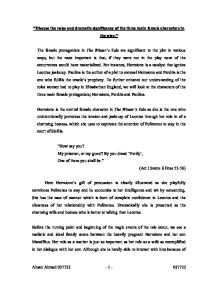 Discuss the roles and dramatic significance of the three main female characters in the play &quot;The Winter's Tale&quot;

"Discuss the roles and dramatic significance of the three main female characters in the play." The female protagonists in The Winter's Tale are significant to the plot in various ways, but the most important is that, if they were not in the play none of the occurrences would have materialized. For instance, Hermione is a catalyst that ignites Leontes jealousy. Paulina is the author of a plot to conceal Hermione and Perdita is the one who fulfils the oracle's prophecy. To further enhance our understanding of the roles women had to play in Elizabethan England, we will look at the characters of the three main female protagonists; Hermione, Perdita and Paulina. Hermione is the central female character in The Winter's Tale as she is the one who unintentionally provokes the tension and jealousy of Leontes through her role in of a charming hostess, which she uses to captivate the attention of Polixenes to stay in the court of Sicilia. "How say you? My prisoner, or my guest? By you dread `Verily`, One of them you shall be." (Act I Scene ii lines 53-56) Here Hermione's gift of persuasion is clearly illustrated as she playfully convinces Polixenes to stay and he succumbs to her intelligence and wit by consenting. She has the ease of manner which is born of complete confidence in Leontes and the closeness of her relationship with Polixenes. ...read more.

At the end of the play the audience realizes she has been kept in secret by Paulina to allow the oracle to be resolved. In order for the resolution of the play to be put into effect the character of Pauline is introduced and she is a thoroughly remarkable character. She is a loyal waiting woman of Hermione who is absolutely dauntless. When we first meet Paulina we are shown that her character is dramatically forceful as she wants to confront Leontes about his allegations against his "gracious, innocent" wife as she approaches the gaoler. "Let him have knowledge who I am". (Act II Scene ii line 2) Even though Pauline is relatively unknown to the gaoler she still makes her presence felt as she boldly gives him his instructions. Paulina is the one who speaks out in Hermione's defense and the bravery of Hermione is shown in Paulina as she aggressively tries to persuade Leontes of Hermione's honesty and innocence. "I say good queen, And would by combat make her good, so were I A man, the worst about you". (Act II Scene iii line 59-61) In the context of Shakespearean England, Paulina would have been sentenced to death for being disobedient to the king. I believe Shakespeare is trying to show the audience that women can have the same significance as men in terms. ...read more.

Perdita's upbringing has its limitations; therefore she is not successful as the hostess of the sheep shearing feast. The shepherd's remarks above show that she acts as the one being feasted upon rather than a hostess. In other words her natural royalty makes her useless in a life like the shepherd's. Her return to Sicilia is prompted by the arrival of Polixenes and Camillo and in turn she flees with Florizel to Sicilia from the court of Bohemia. Perdita is portrayed as a youthful foil to Hermione, which re-enforces the theme of renewal and the cycle of life. Perdita is the item which "was lost (and) must be found". Without her, the play wouldn't get everybody back to Sicilia for the dramatic denouement. The position of women is very difficult to interpret in The Winter's Tale but all are dramatically vital and significant. Hermione, Paulina and Perdita are all shown as vital plot devices and are also shown as brave and helpful. Shakespeare seems to be making a point about social hierarchy in the day and the fact that even women in the play were played by women on stage is making a poignant statement about the role of women in the play. My conclusion is that women in The Winter's Tale are as vital as their male counterparts and I believe that during the course of the play much abuse is heaped on them. Shakespeare wanted to show the heavy burden of being a woman in his time and wanted to make a statement against the stereotypical view of them. ...read more.