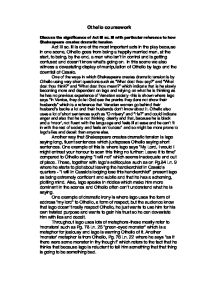 Othello coursework Discuss the significance of Act III sc. iii with particular reference to how Shakespeare creates dramatic tension Act III sc. iii is one of the most important acts in the play because in one scene, Othello goes from being a happily married man, at the start, to being, by the end, a man who isn't in control and is getting confused and doesn't know what's going on. In this scene we also witness a devastating display of manipulation of Othello by Iago and the downfall of Cassio. One of the ways in which Shakespeare creates dramatic tension is by Othello using very short questions such as "What dost thou say?" and "What dost thou think?" and "What dost thou mean?" which indicate that is he slowly becoming more and dependent on Iago and relying on what he is thinking as he has no previous experience of Venetian society-this is shown where Iago says "In Venice, they do let God see the pranks they dare not show their husbands" which is a reference that Venetian women go behind their husband's backs a lot and their husbands don't know about it. ...read more.

Another 'monster' metaphor is from Othello, Pg. 76 Ln. 22 where he says "as if there were some monster in thy thought" which refers to the fact that he thinks that because Iago is reluctant to tell him something that that thing is going to be something bad. Another method that crops up frequently is forms of address-how the characters address each other. On Pg. 77 Ln. 21 Iago says "Good my lord pardon me" and the phrase "my lord" is repeated at least 20 times during the scene. The phrase "my lord" is ambiguous because when Othello hears people address him with respect makes him feel as though he is still in control and isn't relying on Iago and also Iago is trying to get Othello to trust him so Othello will believe what he is saying. Repetition always features a lot throughout the play such as when Othello says "Is he not honest?" and Iago immediately repeats him saying "Honest, my lord" which shows that Iago is playing with Othello's mind and Othello will be thinking about the word 'honest' because of the repetition and so will start questioning Desdemona's honesty. ...read more.

The use of 'plants' could also be interpreted for hidden 'forces' such as when Iago says "Our bodies are our gardens" he could be interpreted as meaning that if your 'garden' (metaphor for body) is left unchecked then it may grow wild and out of control-as is the case of Iago becoming so obsessed with revenge. Also Iago is 'planting seeds' of distrust into Iago's mind. There is also a usage of references to poison-mainly from Iago such as "I'll pour this pestilence into his ear" and "The moor already changes with my poison". These are metaphors for Iago 'poisoning' the mind of Othello and making him believe what Iago is saying and so Othello becomes more and more preoccupied with trying to see if Desdemona is in love with Cassio and starts to see lies and deceit all around him. One more way in which Shakespeare creates dramatic tension is about references to demons, hell and 'monsters' such as when Iago tells Othello to be careful or beware of jealousy "green eyed monster which doth mock the meat it feeds on". Hell and damnation also are present throughout Othello, even more so towards the end of the scene where Othello becomes preoccupied with the religious judgement of Desdemona and himself. Othello thinks Desdemona's betrayal is "monstrous, monstrous!". ...read more.

This essay responds well to the question. There is a clear focus on the significance of the scene in creating dramatic tension, rather than simply retelling the plot. This is good, as many essays at GCSE level will think they ...

This essay responds well to the question. There is a clear focus on the significance of the scene in creating dramatic tension, rather than simply retelling the plot. This is good, as many essays at GCSE level will think they are being tested on their knowledge of the play, meaning they don't analyse language, form and structure and fail to build an argument. I liked how the essay comes to the conclusion saying that the scene is central, with the use of this critical language showing the ability to form a justified judgement. I would've liked to have seen tragedy explored, as this is a scene whereby the audience are identify the beginning of Othello's downfall.

The analysis in this essay is sound. What I liked in this essay that is often absent from GCSE essays is the reference to Othello and Iago being Shakespeare's constructions. This is evident when the essay tells "in which Shakespeare creates dramatic tension is by Othello using very short questions". I would, however, make this more explicit by rewording the sentence. I would say "Shakespeare has Othello use short sentences to create dramatic tension". At times this essay goes back to simply saying "where Iago uses the form of address" which is a shame, as it showed potential. It is key to show the examiner that you are aware these are Shakespeare's constructs, as it allows you to focus on why he has created them for dramatic effect. Language is analysed well, but sometimes the points are irrelevant. Yes, the essay picks up the use of plants in the scene, but it isn't necessary to the question. There is a skill in making sure you write about the good points, such as Iago's use of poison imagery, and unfortunately this essay doesn't display this.

This essay has a clear introduction, and a clear conclusion. These both weave the argument together, but unfortunately the rest of the essay has a poor structure. I feel as if this essay is simply listing points. This is evident through the first sentence of each paragraph. For example "One of the ways", "Another way" and "Another method that" doesn't show any craft, and hinders the examiners ability to distinguish between points. If I were answering this question, I would be signposting paragraphs with sentences such as "Shakespeare uses the repetition of Othello's language to show his desperation, thus creating tension within the scene". This shows that I am focused on the task, and doesn't seem as if I am simply listing. The style is also questionable here, with syntax being a problem. For example "The scene is the central scene throughout the play and is the longest, tensest scene" has a number of errors and doesn't show the examiner that this is an abled candidate.